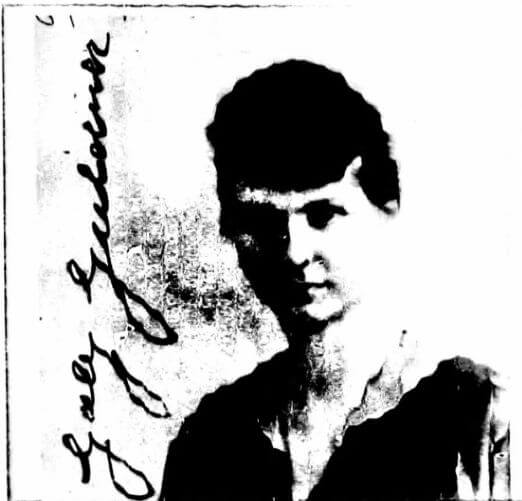 “My family tree has many branches, both living and dead… but all equally important. I cherish the memories that make its roots run deep.”
― Lynda I Fisher

The story of Gabrielle Gouldner Powell Tritz, sister of Rene and Edmond Gouldner, had both my husband and me exploring mysteries that led to some startling revelations.  The interesting ties to Maison Steinbuchel has me contemplating the footsteps that have walked the hallways of this home in a whole new way.

Her ties to our home, however, go past the family connection.  Gabrielle, Gabby to her friends and family, listed our home as her address when she first arrived in Wichita from France.  She would have resided here with Marie-Louise, Bertha, and Rene.

Born in Metz, in northern France, and growing up in Strasbourg, she arrived in the US in August of 1915.  Her immigration was from England where she was visiting when WW1 prevented her from returning to France.  Gabby applied for US naturalization in Feb 1917.  She lists her address as 1905 Park Place in the Registration affidavit of Aliens in 1917-1918.

September of 1918, she requests an address change from Wichita to Cleburne TX to teach school. This request shows 1905 as her address.  There is also an indication she was considering returning to France during this time.  Obviously Gabby was exploring options!

All plans became obsolete when she met and married Herbert Livingston Powell of Wichita. It was announced in The Wichita Eagle Beacon on September 11, 1920.

“Today an announcement of special interest is made by Dr. and Mrs. Rene M Gouldner – the engagement of their sister, Gabrielle Gouldner to Mr.. Herbert Livingston Powell.

Mr. Powll has actively been devoted to the charming French Mademoiselle for several months, but when last spring Miss Gouldner planned her return to her home in Alsace-Lorraine, friends thought that perhaps the romance had not taken the serious turn they had all suspected. However, Gouldner decided to remain in the United States for a time and decided to make Wichita her permanent home.

Miss Goulder’s home is in Strasbourg, Alsace-Lorraine.  When the war broke out she was visiting in England and could not return home.  Spending several months there, she came to the United States to visit her brother Dr. Gouldner.  She entered Fairmont College here and has since become one of the best-liked girls in this younger crowd.

Mr. Powell is the only son of the Mayor and Mrs. John F. Powell.  He is not only a native Kansan but a real Wichitan, having been born in this city.  For several years he made his home in the West, but after the war during which time having served overseas in the 4th Division, he returned to Wichita and is engaged in business with his father in the Wichita Wholesale Grocery Company.

The couple plan a winter wedding.”

A Simple Yet Significant Marriage

They married on January 19, 1921, at 1905 Park Place, our home,  “Young Billy Wilson” is mentioned in the article as the ringbearer – Elisabeth’s first son, who was later killed in WW2:

MISS MARIE GABRIELLE GOULDNER – MR. HERBERT L. POWELL. Occupying the attention of society this week is the marriage of Miss Gabrielle Gouldner and Mr. Herbert L. Powell which will be quietly solemnized this evening at eight o’clock at the home of the bride elect’s brother and sister, Dr. and Mrs. Rene Goulder on Park Place.

Although the wedding will be a simple affair it Is of exceptional interest to the many friends of the two families. Miss Gouldner, who came to Wichita from Alsace-Lorraine to visit her brother just after the outbreak of the war in Europe, remained here and has made many friends who admire her charming personality. Mr. Powell is the son of Mayor and Mrs. John L. Powell, one of Wichita’s most prominent families. The Gouldner home has been beautifully decorated for the occasion with potted plants and white flowers. Pink and white will predominate in the decorations and gowns worn by the attendants of the bride. In the living room, an altar has been arranged banked with greenery and flowers with a background of the green intermingled with white flowers.

Preceding the ceremony. Miss Margaret Brown will sing a group of songs which include “I know,” “The Birthday,” and “Perfect Love.” Mrs. Lucile Kells Briggs will accompany Miss Brown and will also play the Lohengrin wedding march for the entrance of the bridal party. During the time the Reverend Andrew Melrose Brodie is performing the marriage service, Mrs. Briggs will play softly. a prelude of Chopin.

The little flower girl, Jane Seydell, daughter of Dr. and Mrs. El. M. Seydell, will wear a frilly frock of pink organdie and dainty sippers.  On one arm she will carry a pretty basket filled with rose petals. Young Master Billy Wilson, wearing a clever little suit, will carry the two rings for the double-ring ceremony on a white cushion.

Miss Gouldner has chosen as her matron of honor, Mrs. Rene Gouldner, who will wear her wedding gown. It is made of white satin handsomely trimmed with pearls. Her corsage will be of white with touches of pink. Miss Agnes and Miss Margaret Long, two of Miss Gouldner’s most intimate friends, are to be the brides’ maids. Their frocks are exquisite creations of chiffon entirely handmade. Miss Agnes will wear final colored chiffon fashioned with tiers of scarlet about the skirt. Slippers and hose will complete the costume. Her sister will appear in cornflower blue chiffon with the skirt fashioned in a petal effect. The frocks are entirely untrimmed, relying upon their own fluffiness and exquisite material and design for effect.

The Bride will appear in a baud some gown of white satin made en train and combined with beautiful pearl trimming. The satin for the wedding gown was sent from Paris by relatives of the bride. The skirt is slightly draped at each side and caught with exquisite orange blossoms of wax which were also sent from France and are the kind worn by Parisian brides. These tiny blossoms also are used to catch the veil at intervals. Miss Gouldner will wear the wedding veil of her sister, Mrs. Rene Goqldner, which is fashioned of handsome real lace and reaches the entire length of the train. A hand of the lace and pearl circles the head with the effect of a crown.

Mr. Powell will be attended by Eugene Stanley as best man.”

Exploring Mysteries Of Happily Ever After

Following the honeymoon, the couple lived in College Hill at 253 N Roosevelt with his parents:

Mr. and Mrs. Herbert 253 North Roosevelt Avenue. Mrs. Powell was before her marriage Miss Gabrielle Gouldner and her home was in Metz, France. She attended Fairmount College where she was a member of Alpha Tau Sigma and is a member of the Wichita A. C. A. Tennis and golf are among her favorite sports. Mr. Powell is a member of the American Legion, Lions and Country Clubs, and the Board of Commerce.  (from the 1921 Wichita social register)

And it seemed that all was well, but then the story takes a turn.  Too much of a turn for one BLOG post.

Stay tuned, there is much more to tell about trips back to France, her work in the French resistance, time spent in a concentration camp, and more!

Rescuing lost stories takes Exploring Mysteries at times.  Gabby’s story is one of those.  Is it worth it?  You tell me!  Please comment below.  Download the FREE PDF to begin your story rescue today!

Previous: Happy Twenty Twenty Two? Yes, With Forward Motion
Next: Research Is What I’m Doing While Figuring What Out What Inspires Others