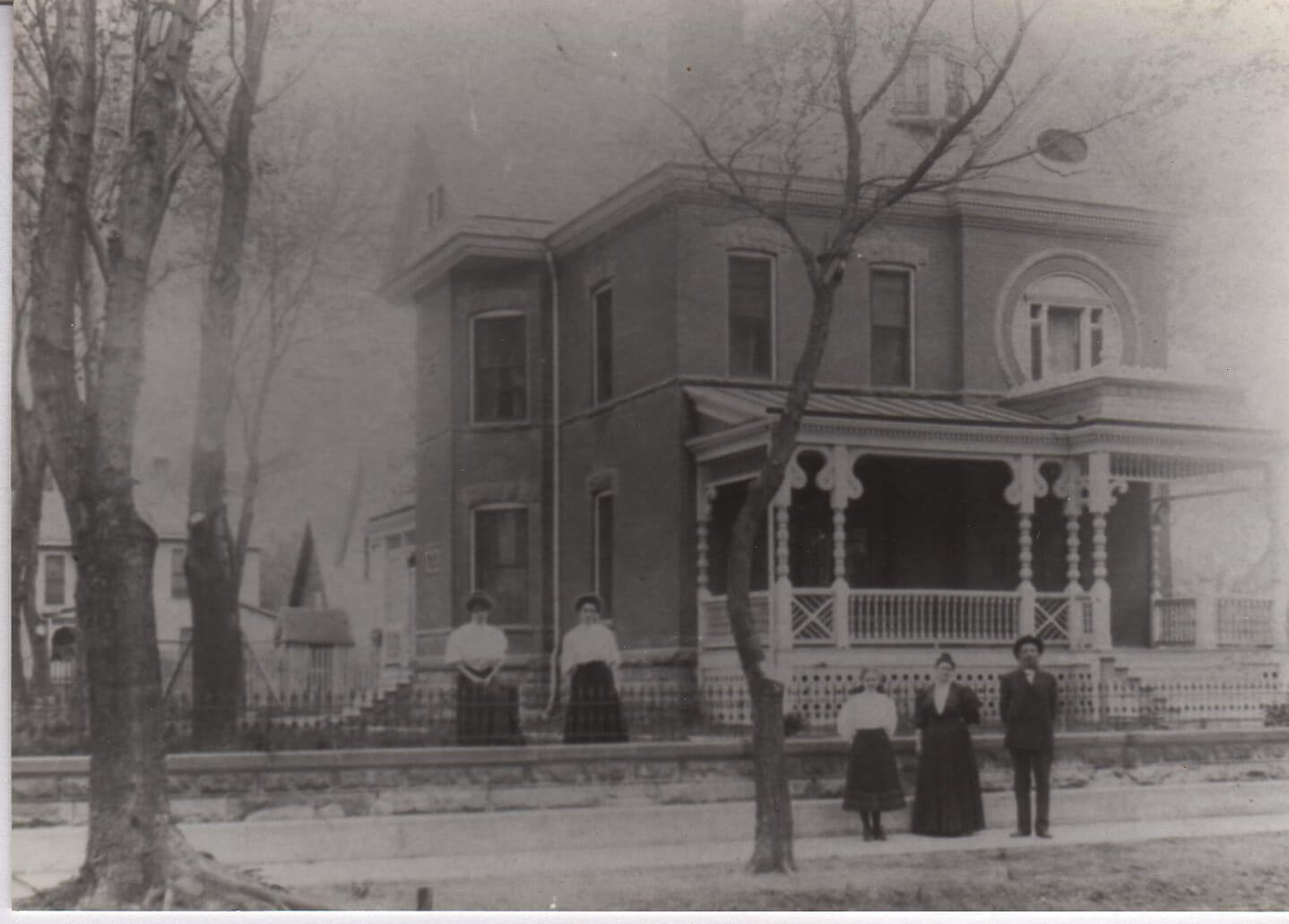 Maison Steinbüchel, a Kansas State Historic Landmark, our home, is named for the family of Herman Frederick Steinbüchel , the second husband of Marie-Louise Hahn.  I have been digging into the details of the three family lines that blended into one and lived in this landmark.
The life of this blended family is told in the book “A Living Gravestone” by Elisabeth Guldner, Herman’s daughter. Other posts have outlined Marie’s marriage to Peter Stackman, their journey to Wichita as well as Herman Steinbüchel ‘s parallel journey to the area.

1867 – Left Cologne, Germany and traveled to New York with his brother and sister, Karl and Josephine
1867 – Worked on a farm and in a Syrup factory in New Jersey
1870 – Moved to Kansas
1874 – Became a Citizen of the United States – applied for a Land Grant in Kansas
1876 – Became the agent for the German-American Life Insurance Company for the state of Kansas
1878 – St. Mark’s Land Grant Approved/Finalized
NOTE:  The dates above are from a combination of the book and Bureau of Land Management Records.   When dealing with family histories, dates do not always line up. There are no doubt other records that could more precisely validate Herman’s movements, but that effort remains for a future date.

It was in his capacity as the insurance agent for the Stackman’s that he first made the passing acquaintance of Marie-Louse.  After Peter Stackman’s death and, in the process of settling the Stackman estate, they became more acquainted.
Marie attempted to play match-maker with Herman and the governess, but Hermann made it clear he was only interested in her.  They married eighteen months after Marie-Louise was widowed at the young age of twenty-four.
Marie brought two children into this second marriage, Bertha and Frederick (Fred or Fritz). One daughter Matild, had died as an infant. Fred aged barely two when at the blending of the family.
Herman’s father and eight siblings, who had joined he and Karl,  lived on the land they had received via grant in St. Mark’s Kansas.  Herman had an apartment in the Northern Building at Main and Second in Wichita allowing him to better over see his Insurance Agency.  Marie, of course was living in her home, the Stackman farmstead,  on the river.
Herman must have moved into the farmhouse with Marie initially.  However, soon after their marriage he purchased land at 1150 North Main Street and had a home built for his new family.  It must have been built rather quickly as their first child was born there in 1983.

Marie-Louise and Herman had three children:

All three were born in this house.  The book goes into much detail about the house at 1150 North Main, its’ combined furnishings from the blended households and how life proceeded.  It is clear from the book that the author had very vivid and fond memories of this transition time and life in this home.  She spoke of:
It must have been quite the busy corner!

In late 1895 or early 1896 Herman’s Father, one brother, Max and two sisters, Julia and Johanna, bought and moved into the house at 1154 North Main.  Louie had married and he and his wife, Clara lived nearby as well, although the author does not say where exactly.
Elisabeth (Aunt Lizzie) had also married ending up in Andale, Kansas with her husband John.  It is not clear from the book how long the family lived in the property at 1150 North Main, but the estate included the house when Herman died in 1924.
Today the corner of 12th and Main looks quite different.  The sites of 1150 and 1154 North Main have small modern infill houses on them.  While the new Horace Mann elementary school site on the northeast corner. The then vacant lots have older 1920’s vintage homes on them.

As mentioned before, the north west corner, where the blacksmith shop was to have been, is where the Midwest Genealogical Society now resides. Interestingly, this was also the corner where the the depot and general offices of the St. Louis, Fort Scott and Wichita Railway were located in 1882 according to the genealogical society’s web site (page 5).  However, a 1903 insurance map depicting the house at 1150 North Main, does not bear that out.

I grieve these lost places, but the stories live on – as long as they have a Voice.  Not allowing a story to get lost is a precious thing.
Have you been thinking about a story you want to research, record and tell?  Please share your idea in the comment section below.

Previous: How Does An Abstract Preserve History?
Next: Education – The Stackman-Steinbüchel Children