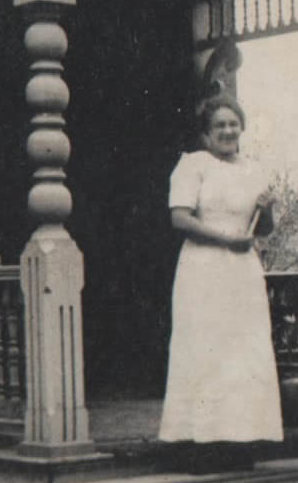 “Love looks not with the eyes, but with the mind, and therefore is winged Cupid painted blind.” – William Shakespeare

June is rapidly approaching, as is the peak of the wedding season.  Even in these times, June weddings continue as a tradition.  It seemed appropriate to recount the weddings that took place in our lovely HIstoric Home, Maison Steinbuchel.  At least the ones we are aware of!

Bertha Josephine Stackman and Renee Gouldner (Guldner) were married, September 12, 1912. (Bertha’s obituary states they were married September 4, 1912)  This wedding was noted in the Kansas State Historic nomination for our home, although the year is incorrect*.

Weddings, alone, are not justification for historic designation, however, weddings of prominent families do add to the case.

In this instance, Renee was a well-known and also, personal physician to Walter Beech, founder of Beecraft.  Bertha a local socialite and overall good match.  Her engagement announcement held a prominent place in the Wichita Eagle on August 18, 1912.

In the book “A Living Gravestone” by Elisabeth Wilson (Gouldner), as Elisabeth first describes the house, she states “It had a wide curved front staircase that eventually married off both Momma’s daughters”.  She gives no other details of her older half-sister’s wedding in the book but adds a few more details about her own wedding four years later:

“the wedding was performed before the carved cherrywood fireplace of the big living room.  As Bertha, I also walked down the wide winding staircase.”

Elisabeth Steinbuchel and William Brien Wilson, of Norwalk, Connecticut on  December 27, 1916.  This union failed some years later, although the divorce was never mentioned in the book, records indicate the divorce was in 1932.

Elisabeth remained on her own as a single mother for some time, however in the fall of 1942 Elisabeth and Edmond Guldner** married.  I remember reading they were also married at our home.

Unfortunately, this marriage also ended in divorce in 1947.  When one looks at the upheaval of the times:

It is easy to understand the decisions made at the moment, that, in retrospect did not work out.  Elisabeth remained single until she was killed in a car accident in October 1981.

A Sister-In-Law Walks The Same Staircase.

A third wedding was that of Gabrielle Gouldner to Mr. Herbert Powell. Gabrielle (Gaby) was the sister of Dr. Rene Guldner and sister-in-law to Bertha Stackman Guldner.  The engagement was announced on September 11, 1920.  Details of their wedding plans were published in November, which provided the location: the home of her brother on Park Place

POWELL, Mr. and Mrs. Herbert 253 North Roosevelt Avenue. Mrs. Powell was before her marriage Miss Gabrielle Gouldner and her home was in Metz, France. She attended Fairmount College where she was a member of Alpha Tau Sigma, and is a member of the Wichita A. C. A. Tennis and golf are among her favorite sports. Mr. Powell is a member of the American Legion, Lions, and Country Clubs, and the Board of Commerce.

The Fourth – Another Family, Another Wedding

Ultimately, the Steinbuchel family sold Maison Steinbuchel to the Roscoe Fox family.  We are aware of at least one wedding during their time in the home.  This knowledge came about in the fall of 1988, a few months after we had become owners.

We had agreed to be a part of the Historic Midtown Citizens Association home tour.  The tour included ten houses on Park Place and served as a fundraiser for the organization.  One of the 1200 or so, people who toured our home was Mrs. Roscoe Fox and her daughter Patricia.

It was then we learned that Patrica had also descended the winding staircase, past the beautiful stain-glassed window to be married in the front parlor of our lovely home.

Have there been more weddings in this lovely home?  No doubt, but these are the ones we are aware of.  As opportunity arises, we plan to add to our knowledge of marriages that took place in our home.  More research is needed, however, I am sure the information is out there!

Wedding stories are wonderful legacy stories to capture, but there are other types as well.  Get your free download of Five Legacy Story Types today!

*the year noted in the nomination was actually the year Elisabeth was married.

**Edmond was Rene’s brother who kept the original French spelling of the last name, whereas Rene had changed the spelling to help with proper pronunciation in the United States.

Previous: What To Do With Leftover Treasures Rescued From An Attic Renovation
Next: How Memorials And Memories Challenge And Encourage

One thought on “Four Weddings Of Maison Steinbuchel – Love, Elegance and Disappointments”