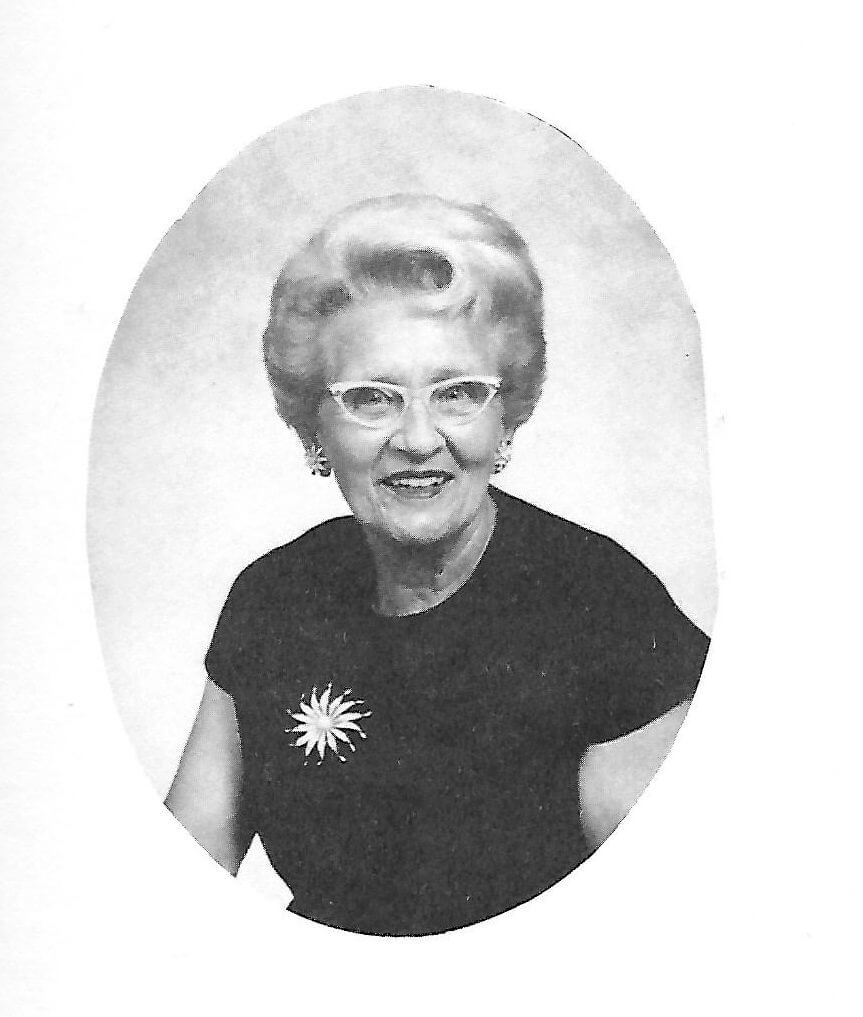 “To my sons. their beautiful wives, Claudine, and my grandchildren, not only those who now live, but also to those that follow, I dedicate these pages.  This story would have been lost with my passing had not this been written.  God Bless you! – your mother and grandmother, Dorothy Elisabeth Wilson (Guldner)”  – The Dedication Page from “A Living Gravestone”

My impression of this passionate formidable woman formed when I first heard about Dorothy Elisabeth Steinbuchel Wilson Gouldner standing in the front entry of Maison Steinbuchel.  This had been her home as a young woman,  We were viewing the house with our relator as a candidate as a home in Wichita, KS.  The owner from whom we would purchase the house, provided a short rundown of the history of the home.

She stated she met Elisabeth once when she stopped by the house unannounced.  Driving a Cadillac, dressed to the nines including a fox stole, she breezed in, dropped off a copy of her book, and floated out like the wind.  From that description, I got the impression that Elisabeth was a force of nature, always on the move.

That first impression of this passionate formidable women was added to through her book and various articles we discovered over the years.  You learn a lot about a person through:

Her family life centered around social standing, but pocked with loss and survival.  She was the eldest of three children of Marie-Louise-Stackmam and Hermann Steinbuchel.  However, she entered life with two living older half-siblings from Marie’s first marriage to Peter Stackman.

As the first born of Hermann, but Marie’s fourth child, I get the feeling she dealt with a mixed sense of being between first and middle child identities.  These kinds of dynamics in blended families were not well articulated in the past.  There seems to be an underlying sibling rivalry throughout her book.  A rivalry, not unkind, just there.

She had a beautiful voice.  According to her book and a Wichita Eagle October 6, 1981 article, she aspired to and trained for the New York Metropolitan Opera.  However, her romance and marriage to William Brien Wilson, whom she met in New York, took her down the path of mother and homemaker.  They married at Maison Steinbuchel December 27,1916.

A combination of her father’s death in 1924, a visit from her mother outlining the family’s financial difficulties and a strained marriage, Elisabeth and her three sons returned to Wichita.  There is no specific mention of a divorce in the book, but it is apparent that she was making a new life helping her mother manage the family’s not insignificant real estate holdings.

About 1942 She married Edmond Guldner, her brother-in-law Renee Gouldner’s* brother.  She describes this in her book as follows:

“…I had married a refugee, a foreign gentleman, a physician speaking no English with a small twelve-year-old child…”

This was Edmond’s third marriage, having lost his first two wives in France.  The move to the US occurred during WWII under chaotic conditions.  It is unclear how the marriage came about but, this passionate formidable woman devoted herself to helping Edmond both set up and and run a medical practice in Lamar, MO.

A few months after their marriage, Elisabeth’s son, Bill became missing in action.  Apparently shot down over Gabes, Tunisia.  A year passed before before he was declared dead by the war department.  In her book, she credits her work with Dr. Guldner as a welcome focus during this difficult year.

The small child mentioned was Claudine Arend Cox.  She provided a detailed account of her life in “My Life Story” This is the same Claudine named in the dedication to Elisabeth’s book, A Living Gravestone.  This marriage ended in a few years later with Edmond marrying a young woman from Switzerland with three children.

She spent her later years tending to her family and working with many civic organizations including the Gold Star Mother’s.  Oh, and yes, writing her book!

She was very proud of the book and rightly so.  It contains a mass of information about this family.  Information that would be almost impossible to pull together today.  It provides invaluable scaffolding for our historic home’s history.

Dorothy Elisabeth Steinbuchel Wilson Gouldner died Tuesday, October 6, 1981 when she lost control of her car and hit a tree on her way to the Evergreen Senior Citizens Center, a mile north of Maison Steinbuchel.  She was 88 years old.

Elisabeth’s said it best in her own words:  “This story would have been lost with my passing had not this been written.  God Bless you! – your mother and grandmother…”

This is true of all of our stories.  Unless we set about to capture, rescue, them, our stories will be at best summarized in an obituary.  At worst completely lost to time,  The fact that Elisabeth’s step-daughter Claudine, also took the time to record her story is credit to the possible influence of Elisabeth’s work.

Are you ready to start capturing your story? or,  the story someone who has passed?  Begin today by subscribing and downloading the free PDF:  Five Legacy Stories Story Types You Can Collect Before It is Too Late!

* Guldner is the original French spelling of the name.  Renee Gouldner added the “O” so that it would be pronounced correctly in America.   Renee’s brother Edmond, Elisabeth’s second husband kept the French spelling.

Previous: Taking Time For Exciting Memorable Chance Encounters
Next: How Diving Into The Histories Of Ancestral Geography Expands Understanding