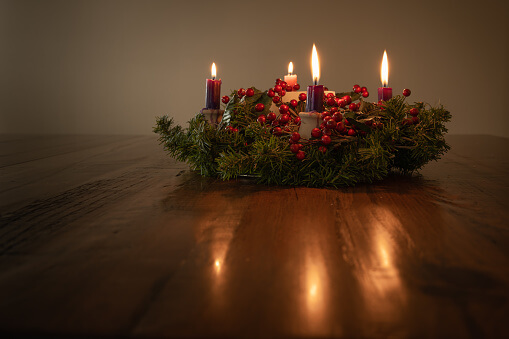 Within a manger he was laid
And by his side the virgin maid
Attending on the Lord of Life
Who came on earth to end all strife. – The Wexford Carol, Third Stanza

Last year as my husband and I enjoyed our Christmas dinner in our dining room at Maison Steinbuchel, we were listening to the Celtic music of the season.  The Wexford Carol was among the selections.

Certainly, I had heard this carol before, but this time it jumped out at me.  The WEXFORD carol?  My husband’s Irish roots are in County Wexford, Ireland!

As we listened to several versions of this Joyful Celtic Roots melody:

Although we have yet to visit this part of Ireland, it is not our first connection with the Cullens from Wexford.  Our first was on an autoroute from Brussels to Paris in the late 90s.  I wrote about it in a 2015 BLOG.  Here is a portion:

“My husband knew he had Irish roots on his father’s side but had just learned these originated from County Wexford south of Dublin.  His father had discovered this as a part of his ongoing genealogy research.  Traveling along the autoroute, near Verdun, we passed a truck (or Lorry as they are called over there), and on the side of the truck were the words:  Cullen Transport LTD, County Wexford.  I could hardly believe my eyes.  We waved, hollered, and squealed “they are still there, they are still there!”.  Unfortunately, there was no opportunity to make any further contact, but there was a connectedness that was very real.”

Originating in the village of Enniscorthy where my spouse’s Cullen ancestors came from in county Wexford, the Wexford Carol has become one of the most famous Irish carols.  Listening to the carol several more times, we decided to “visit”, and brought up a map of Enniscorthy Ireland.

As we expanded the map, just to the east of the center of town was a street:  Father Cullen Terrace.  Of course, we had to look him up.  We discovered he was a prominent Jesuit Priest.  Obviously, not a direct descendant, but somewhere in the Cullen Clan, there is no doubt some connection.

The thing about having an Irish surname, you are automatically part of the family, no matter where you are.  I discovered that while working in Brussels, and wrote about it here.  While there, my husband belonged to a writer’s group, that met in an Irish Pub.  With the name Cullen, he may as well have been full-blooded Irish as they treated him like a long-lost cousin!

I enjoy making these rather obscure connections.  It adds depth to one’s existence.  Writing it down so it can be retold, preserves that connection.

Take time to preserve your stories this season.  A perfect time to do so.  Perhaps give the gift of a story to a friend or loved one.  The Free download below can help you do so.

Previous: Giving A Voice To The Voiceless – The Christmas Shepherds
Next: An Awesome Example Of A Story Rescue – Fearful Shepherds