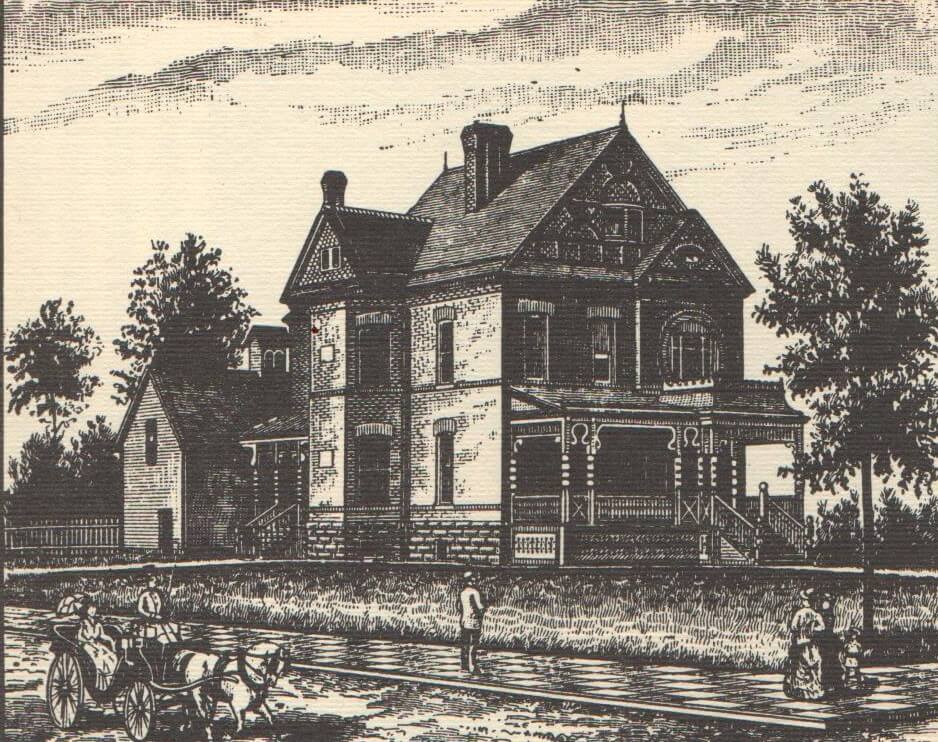 “And those from among you will rebuild the ancient ruins; you will raise of the age-old foundations; you will be called repairing the breach, the restorer of the streets in which to dwell.”   Isaiah 58:12

There are a series of BLOG posts about how the families, for whom our historic home is named, converged into a single story.  Included are the reasons we call our home Maison Steinbuchel and our very personal connection its’ narrative.

How did we get drawn into the Maison Steinbüchel story-line?  Aside from simply purchasing the property, why is it so personal?  Those of you who follow me on Twitter and Facebook see some version of the following on my profile:

“Marie-Louise Steinbüchel, wife of prominent Wichita real estate man, Herman Steinbüchel, was born in Strasbourg, France in the 1860s and came to Wichita as the bride of Peter Stackman, another famous Wichitan. The unique combination of Richardsonian and Victorian architecture of their residence as well as the position of the family in the community, led to the designation of 1905 Park Place as a local Historic Landmark in 1977. The residence was placed on the local Historic Register in 1978 and named a Kansas State Historic Landmark in 1992.”

These official designations show it as The Steinbüchel House.  We began calling it Maison Steinbüchel, not to be pretentious, but rather to bring to the forefront Marie-Louise Hahn Stackman Steinbüchel’s French Alsatian roots. These roots are quite precious to us and are how our stories are connected.

Our Journey into the Story

In the late 70’s when my husband began the decision process of which doctoral program he would enter, his mentor suggested the University of Strasbourg, France.  It was, to say the least, an idea that took our breath away.

David had attended a couple of summer courses in Strasbourg in the early 80’s as a part of of his Masters in Apologetics from the Simon Greenleaf School of Law.   However, the thought of moving to France in order to complete a doctorate gave us pause.

None-the-less, one step at a time, the suggestion became a reality.  We packed up and moved to Strasbourg and in 1987 on a beautiful June day David received the degree of “doctorate de la  troiseme cycle” in Protestant Theology.

During the 1983-84 time frame while we were first in residence in France, I received a degree, as well, from the University of Strasbourg: in French.  Of course, in the course of living and studying abroad, we learned much and fell in love with the Alsace region of France.

In 1988, we moved to Kansas, and back to my roots.  We had lived in the Los Angeles area and grew weary of congestion, cost of living, tract houses and, yes, sunshine.  I longed for my Kansas sunsets, sunrises and seasons.

As we looked at houses, I wanted something with depth and history.  Maison Steinbüchel had all of the features I wanted.  Yes, it needed work, but something about this house said “yes”. During our final walk through, before the offers and counter-offers, we learned of the house’s history.

We discovered the name came from a woman who had been born and raised in Strasbourg France.  This made it clear why the house was calling to us!  It needed a French speaking family in it again.  One who remembered what Marie-Louse knew.  We were coming home in more ways than one.

The owner gave us a book that had belonged to one of the family members. “A Living Gravestone” by Elisabeth Wilson, documents the roots and history of the family.  At closing, we took custody of the abstract of the house in which the first entry refers to the signed treaty by President U.S. Grant.

The abstract confirms the house stands on land purchased from the Osage Land Trust in 1870.  It is current through the 1970s.  In it are notations of the various legal transactions including a few tussles among family members involving the property.  It is a great supplement to the book.

People and Places – Repairing The Breach

This is is of itself awesome.  But more that that, we have met many of the descendants of Marie-Louise, Peter Stackman and Herman Steinbüchel.  French, German and American.  In may of 1999 we hosted a reunion at Maison Steinbüchel of the Hahn family.  French and American members were present.  We interpreted for them!  What an honor.

We have visited the Steinbüchel region in Germany, seen the manor house and walked the estate.  We were guests in Marie’s great great nephew’s home in Strasbourg and passed by the location of the shop where Marie-Louise’s family sold groceries.

I have living descendants as friends on Facebook.  Connections have been made via this website as well.  It is an honor to live in a Historic Landmark structure.  To be allowed some entrance into their story as it intersects ours.

It is more wonderful to know descendants living today as a testament to the courage and adventuresome spirit of their ancestors.  Who left their families and country to make a new life in Wichita, Kansas.

Can you identify a place in time and/or location where your story intersected another?  What not write it down?

Click here for a free PDF to get you started!

Previous: A Mother’s Love – A God Gift
Next: Three Transformational And Memorable Stories That Connect Time