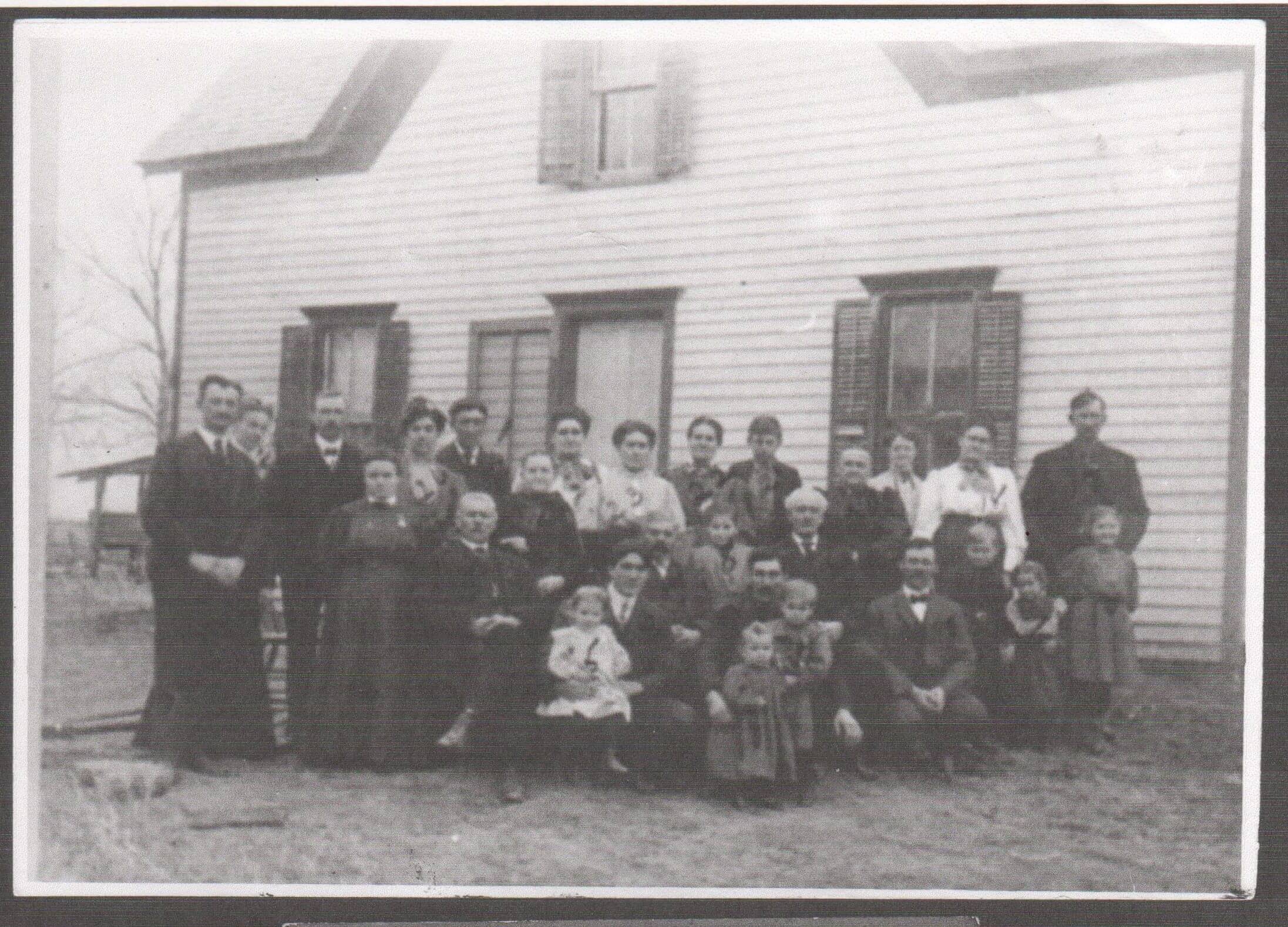 My mother’s paternal great grandfather Frederick Konrad Regetmeier,  immigrated from northern Germany in the mid 1860’s.  He ended up in Jewell County, Kansas, a journey that took a decade.  The legs of his trip followed the model of many of his country men at the time:
They lived the first five years of married life faming the homestead living in a dugout.  Around 1880 they built their dream home on the homestead.  By 1886 they had seven children, four boys and three girls. Another girl was born some years later, with two infant deaths in between.  They also took in an young orphaned boy who died at the age of eight.  With a farm to tend to and household of nine or more to feed, clothe and educate, it is not hard to fill in the story with daily life.  There were no doubt community, some church and other social gatherings.  Births, birthdays, holidays, romance and at some point weddings cam about to celebrate.

Around 1907 there was a gathering of Rightmeiers at the homestead that included two of Fred’s three brothers, August and Christian.  Their respective wives Maude and Naomi were also there.  A lot of time had passed.  Not a lot is known about the lives of the other three Regetmeier boys.  Uncle Chris, the youngest of the four boys had stayed behind in Germany along with Karl the oldest.  I assume Karl stayed as a part of the eldest son’s role in a family or perhaps just didn’t have the desire for adventure as did the two middle sons.
After their jumping ship in New York, Fred and August had at some point taken separate paths  Fred migrated west, finding a sponsor and spending seven years in Freeport, IL west of Chicago earning his right to become a citizen.
August also headed west.  How far they traveled west together on this leg of their journey has yet to be discovered.    The oral history given my younger sister by Lyman Rightmeier stated that August also received a land grant in Nebraska near Lincoln.  However, a search of land grant records has not revealed any record of him doing so.  Some have said that August returned to Germany.  More research is in order.

The Homestead At Its’ Best

What we do know is that around 1907 three of the four brothers, sons of Christian Heinrich Regetmeir of Varenholtz, Germany along with 30 or so other family members gathered on the Kansas Homestead.   Three generations were represented.
This was the first land that had been owned by any Regetmeier in known history.   From the photo, it appears the house received a few upgrades such as:
My great grandfather Lewis and great grandmother Leta were there along with their two oldest boys, my great uncles Leonard and Lester, who look to be the age of  two and three.   That is how I dated the photo.
I do not know what prompted this visit of the German relatives, but it had to have been something significant.  A trip like this would have taken both time and money.  This visit must have stirred in Fred a need to see the land of his birth again.   About six years later he made a trip back to Germany.
Does your extended family have regular gatherings or reunions?  What do they comprise of?  Sunday dinners? Special occasions?  or do you avoid them at any cost?!  Please comment below.  Don’t forget to subscribe!

Previous: A Family Summer Picnic, A Castle And Providence
Next: How A Dugout House Demonstrated Wisdom

2 thoughts on “Regetmeier Reunion On The Homestead”