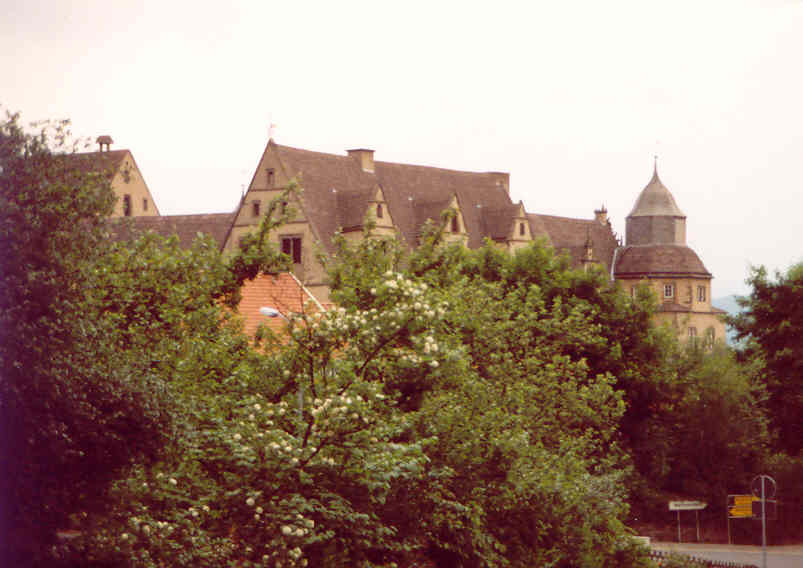 This weekend I will be joining my mother, her brother and members of three of the seven branches of my maternal grandfather’s siblings for a family picnic near Boise Idaho.  Sometime in the 40s or 50s three of  my grandfather’s six siblings moved from Kansas to this area so I only knew them by name.  A large reunion of the Rightmeier clan in Kansas in 2005 and the advent of Facebook reinstated relationships  geography had eroded.

This picnic gathering has me thinking about this branch of my family tree’s German roots.  It centers around a small village in the northern District of Lippe Germany:   Varenholtz.

When my husband and I had an opportunity to visit Varenholtz in 1998, we found a landmark never mentioned in any of the family stories:  Schloss (Castle) Varenholz.  The castle location was the seat of a family of Knights , under Heinrich the Lion. Built to its current size in 1596 by Simon VI, the son of a staunch Catholic Count, who ruled the region and fiercely resisted the Protestant movements in the area.

When the elder Count died, the care of Simon VI, his son, was left to Phillip of Hessen.  Although the Count gave strict orders that his son be educated in the Catholic faith, Phillip did not adhere to this request and Simon was educated as a Lutheran, and later studied “at a reformed school in Strasbourg” where he became a follower of John Calvin (1503 – 1564).  It was in this way that Lippe became a mix of Lutheran and Calvinistic influence.

My maternal great great  grand-father, Frederic Regetmeier,  immigrated to the United States in 1864 at the age of 14. During this period, a long-term drought, along with political and religious unrest made living conditions in Lippe quite desperate.  In other words the feudal system was breaking down.

The life they knew was disappearing.  Word of the opportunities in America sparked by desperation, drove young Frederic and his brother August  to make the voyage.   In reality the brothers were stowaways on a ship to New York.  It is said they jumped ship in New York harbor and swam ashore.

My great great grandfather took a leap of faith looking for a way forward.  He:

It was a hard life.  A life full of risks, heartache and disappointment but the land he worked was his.  He and his family were free.  His son went to grammar school, his grand-son, my grandfather graduated high school. They all were farmers but owned land.

A Leap of Faith in Full Bloom

Federic’s great great granddaughter, me, only knows country life through the many visits, some extended, to the farm.  I went to college, had a great career in aviation but in 1984 took my own leap of faith and returned to Europe.
I attended the university that  the German Count, for whom Frederic Rightmeier grew up working the land for, attended.  My husband earned a Doctorate from that same university: The University of John Calvin, Goethe and later Louis Pasteur. The University of Strasbourg, France.
For me, this and the myriad of stories from other’s lives confirms there is a personal God.  It reassures me He takes a personal interest, without usurping my right to make my own choices (or the choices of others I encounter) yet is somehow guiding my steps.

I want to cooperate with that God, for I know that in that cooperation my Stonebridge will be surer, grander and smoother than if I stumble along on my own.   Even this simple summer family picnic would not be if it were not for a leap of Faith over 150 years ago.
What summer event has impacted your the most?

Previous: Repurposing Tree Bark Into A Landscape Carpet
Next: Regetmeier Reunion On The Homestead