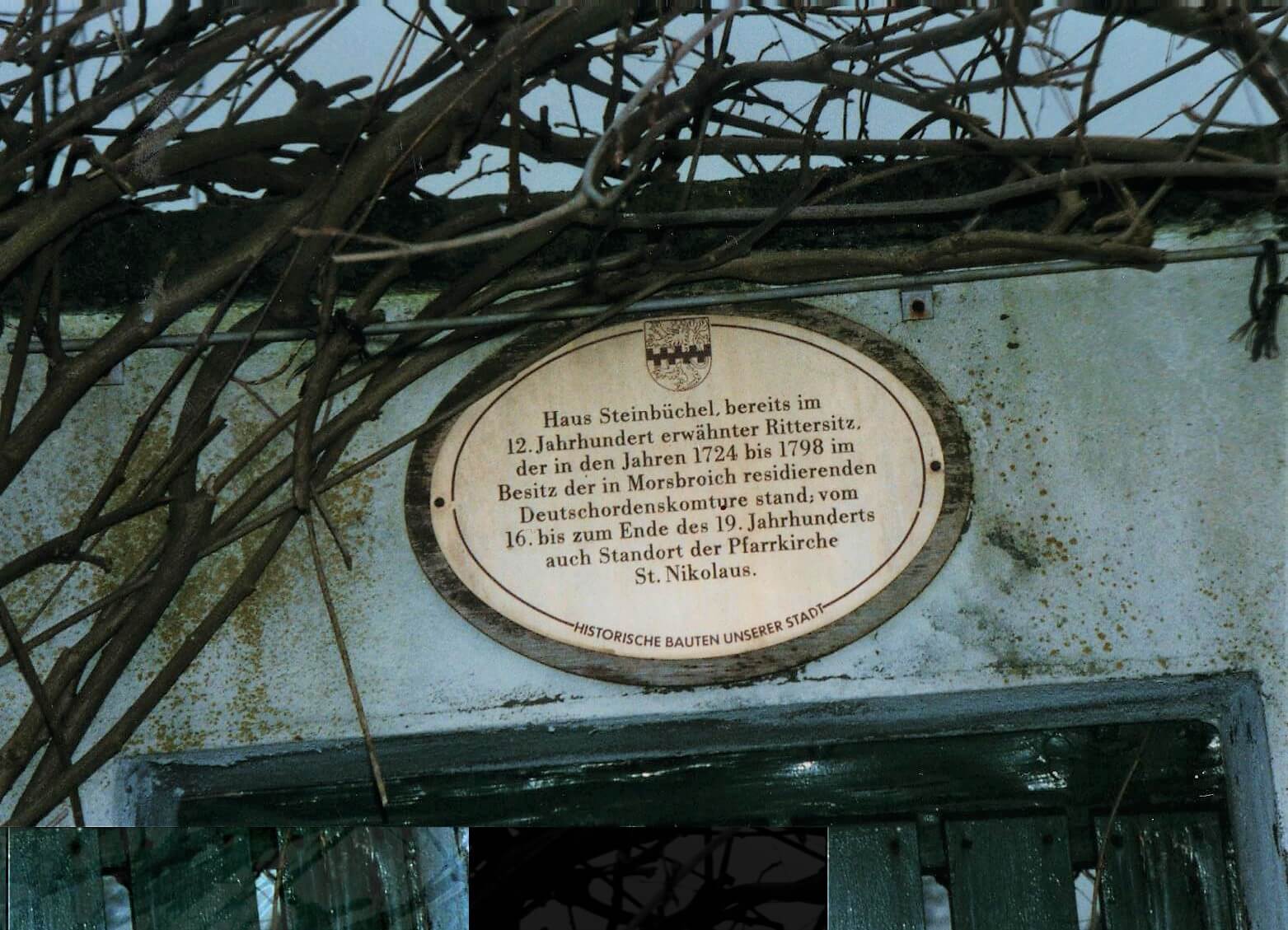 “A people without the knowledge of their past history, origin and culture is like a tree without roots. ” –  Marcus Garvey

Diving into the histories of the families which converged into one and eventually made their home at Maison Steinbüchel, is an ongoing endeavor.  We do so, to better understand the Kansas Historic Landmark where we have made our home since 1988.

I am grateful for the personal history put together in the book “A Living Gravestone” by Elisabeth Wilson Gouldner.  She was the daughter of Hermann Joseph Steinbüchel of Cologne, Germany, Marie-Louise Hahn-Stackman’s second husband.

Elisabeth wrote the book to her grandchildren for several reasons:

As current owners and caretakers of this house, this book provides invaluable information from which to draw on.  What a gift!

Pages 10-20, of the book, are devoted to the Steinbüchel ancestry.  At the time of the writing in 1973, the author compiled the information at hand, written and oral.  It appears to be accurate, as far as it goes.
Googling  “steinbüchel” today, a wide variety of things pop up:
Among other things.  So “Was ist das Steinbüchel?” – (imagine said with a German accent.)  It is in fact, all of the above, but especially a family and a place – or really, places.

Diving Into The Histories Abroad

In our preparations to move to Brussels in 1995, Max Steinbüchel, the great grand-son of Marie-Louise, whom we had met on several occasions, sent us a map of the locations of the Steinbüchel estate in Germany.
He also sent a list of contacts of Steinbüchels in the area.  It was not until in spring 1997, we were able to make the trip to Cologne.  Off we went, speaking little German, not realizing the day we chose was a German holiday.
For some reason the contacts Max had provided did not work out.  Still, we found the town and somehow managed to stumble onto the manor house.  Max told us of its existence.  Deserted and in poor condition, we found it.

We walked around, took pictures, tore the “Steinbüchel” page out of the local phone directory, and followed up with letters via post.

A Knighthood near Cologne, Germany

The earliest mention of Steinbüchel found thus far via the internet is about the same era as mentioned in the book: circa 1200 A.D.  The site states in “1158 Konrad von Steinbüchel acquires a knighthood”.  Knights were essentially a private army of a King or Lord.
The Knighthood in High Medieval Germany were a part of nobility.  The title included land.  We discovered the name of our Historic Home was also the name of a sort of township near Cologne Germany. Steinbüchel, named for Sir Konrad von Steinbüchel, bestowed in conjuection with the title.
Today, “Steinbüchel” is one of several villages in the area that make up the municipality of Leverkusen.
In diving into the histories forming the families for whom our house is named, I realize the value of our trip to the Steinbüchel estate.  The links in this post to maps and the current state of that manor house would be less solid had we not walked those places ourselves.

Your Stories are a Gift Waiting to be Given

Like Elisabeth. I tell these and other stories for several reasons, to:

Elisabeth’s book is a perfect example of why we all, including you, should record in some way, your stories.  Could it be that diving into the histories in your world and writing them down could be for some purpose you are not yet aware of?

To help in this process I have created a Free PDF download of FIVE LEGACY STORY TYPES TO COLLECT.

Previous: One Of A Passionate Line of Formidable Women – Dorothy Elisabeth Steinbuchel Wilson Gouldner
Next: What To Do With Leftover Treasures Rescued From An Attic Renovation