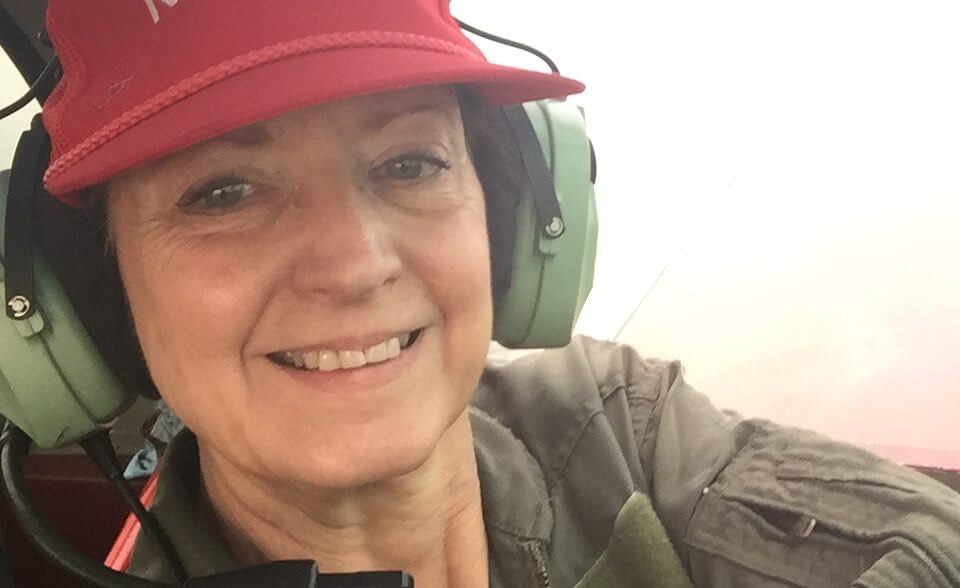 “Mayday” is not a call you want to have to make, but sometimes things go wrong….

When it was time to relocate our airplanes closer to home, logistics were considerable.  One had to be transported by truck, the other needed its annual inspection before the re-positioning.
Once all the details and dates were known, a plan was made.  My husband and I would:
With the help of my sister and nephew, the biplane loading went like clockwork.  Once in Kansas, a dozen or so EAA folks showed up in 105 degree heat and had it unloaded and in its new home in less than 15 minutes.  Whoo Hoo!

The annual inspection on the coupe went well and I was ready to go in a couple of days. I made some local flights including one with a student pilot as a passenger. Preparations were made to fly north first thing  Monday morning.  Final checks and notifications completed, with wheels up at 7:30.
Over the Red River at the Texas/Oklahoma border, I circumvented some local precipitation, climbed up to 5,500 and was on course doing 112 knots over the ground.  I snapped a selfie.  Everything had gone like clock-work, until….

…the Continental 90 engine that had been purring along, began to run rough and loose power.  Since I had just skirted around some localized rain, I pulled the carburetor heat thinking there might be some carburetor icing.  No help.  Rats.
I pulled back power a bit, checked Foreflight for a place to land, dialed in 121.5 on the radio and 7700 in the transponder.  The engine was running REALLY rough.  This is when one’s training kicks in:  Focus and fly the plane.
“Mayday! Mayday! Mayday! Fort Worth Center, Aircoupe, eight miles west of Paul’s Valley Airport, with a rough running engine, landing Paul’s Valley.”
There were some other short exchanges of information, including Center providing the common traffic advisory frequency for the airport.   All of my maps and flight information were bouncing around on the seat next to me and I was grateful for someone to provide the information I needed, …and for some company.
Engine temperature was still within limits and oil pressure was holding.  Once the airport was in sight, I switched to airport advisory, made my inbound call, then focused on getting to the runway safely.  I Did – Thank you Jesus!

Once on the ground, I stopped on the runway, and shut the engine down.  I sat for a moment and resumed breathing.  Center had called the airport manager to advise he had an emergency inbound.  He met me at the airplane.  The local maintenance shop technician came and taxied the little plane to his shop.  She started right up, although running rough.
The manager took me to the terminal pilots lounge and I began the process of notification.  My first call was to my husband, who was planning to meet me at the local airport in Kansas before I headed back south.  The next to my pilot friends who had not yet departed Kansas.  I also called my mom, so she would hear the information from me directly.
Now, to go see what the maintenance shop had found.  As the IA removed the cowl, the shop workers, a couple of other pilots and I stood and speculated as to what had happened.  A spark plug wire that came loose?  A stuck valve?
As the pilot, I wanted to definitively know the issue, so it could be fixed and I could get on my way.  When the cowl came off, it was quite apparent:  The #1 cylinder had a crack next to the spark plug and three fins back the cylinder was darker than the rest.  At least I knew I would not be flying her home today.  Rats again.

Plan B – After The Mayday

back to Texas so I could retrieve the car.  The only change was that my plane would stay in Oklahoma for repairs.  Once my ride back to Texas arrived in Oklahoma, we went to the shop.  By then the cylinder was off the plane and laying on the bench – in pieces.  It was then I realized how close I had been to a catastrophic engine event.  Gasp!  and again gasp!
A new cylinder was located and would arrive the next day.  The shop was awesome in every way.  We agreed on the terms for repair and I left my baby in their capable hands.  I would pass by the next day with the aircraft log books and records on my drive back to Kansas.
Nothing in the schedule had changed.  This was just an unexpected extra step in the process.  Included in this step would be dealing with the coulda, woulda, shouldas while sorting out my rather shaken psyche.

I was glad for a couple of pilot friends with whom to process the event out loud, which we did on the flight to Texas and over a late lunch.  Once on their way, I had the evening and next day to myself to continue the process.
As a retired air traffic controller I had been on the other side of the microphone in aircraft emergency situations.  As an incident and accident investigator, I had listened to and proceeded quite a few emergency events.  I was glad for the experience and training in dealing with these things.  However, on the pilot side, required I draw on that foundation and then some.

Processing The Mayday And Moving On

I reminded myself, that in spite of what “could have been”, the facts were, the incident occurred within range of:

Stuff happens in this world – no revelation there.  When  broadsided by the unplanned and unexpected, here are some suggestions to get back on track the right way:

What “Mayday” type events have you had?  What did you do to move on, Or have you?  Please comment below.

Previous: It is a good thing for an uneducated man to read books of quotations…
Next: When A Surprise Truth About Family Story Is Exposed-Do These Three Things