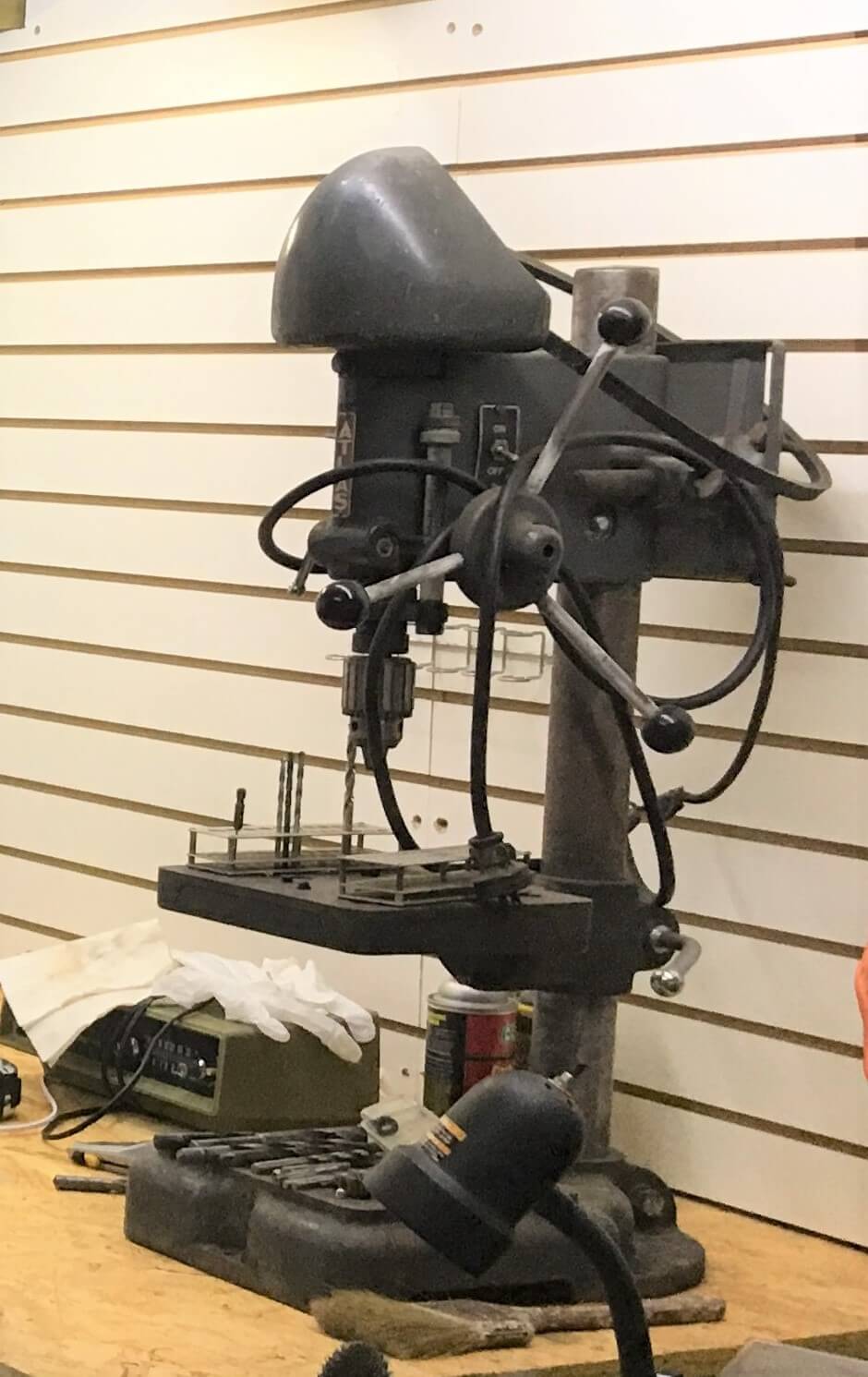 Provenance is something very important in jewelry. You want to know who has worn a piece of jewelry and who it has belonged to – it’s part of its history, part of its aura. – Author: Simon De Pury

An Atlas Drill Press is not generally viewed as valuable as jewelry – unless you are a machinist! To those whose skill lies in crafting, the right tool is a precious thing.  Even more, if there is a story in which it plays a key supporting roll.  This drill press is one such object in my life.

My father’s workshop began in an old one-story barn behind our Kansas home. It was heated with a stove fed with scraps of lumber which took the chill off to about a two foot radius.  I spent as much time as I was allowed with my dad there, yet, I do not remember many details. Perhaps because it was not well lit, so it’s contents tended to hide in the shadows.

I remember a metal lathe, a workbench of sorts, gas welding tanks and lots of hand tools. Somewhere, resided a 1948 Atlas drill press. When Hancock, Inc., an auto salvage and parts store, opened in the 1960s, all of his equipment was moved to a workshop, located in the rear of this automotive parts store, just north of town.

The drill press was among the inventory.  When dad retired, he downsized much of his tool cache along with the auto parts inventory, but the drill press remained.  It was purchased the year I was born, 1953, but it was not because of its’ age or sentimentality that he kept the press. It was so he could complete a project started when I was eight years of age – The EAA Biplane.

Staging For A Biplane Build

In fact, most of the tools daddy kept centered on his plans to finish building the Biplane:  A table saw, many hand tools, the gas welding equipment and of course, the drill press.  When he passed in March of 2000, I inherited the biplane project and tools.

We used the drill press for some projects around the house, but at some point the motor gave out.  Attempts were made to have the motor repaired, but hit only dead ends, so the press sat silent.

In the meantime, the biplane project was taken on as a chapter project by my local EAA Chapter.  In due course,

a drill press was needed.  There is untold talent in this group of folks, and among them is a man who beams with satisfaction in fix ing, redoing and repurposing.  There is nothing he does that is not of the highest caliber.

When I called Paul, I began the conversation saying, “Before I describe the situation, I want you to know that you have complete permission to decline this project.  We can find another way, but….”.  He accepted and within a week, the press had a new replacement motor, a new cord, was cleaned up and ready to go.

The press is on loan for the project or until a drill press is found for the local chapter to purchase.

What Inspires Your Story?

Stories are inspired in many ways.  By:

Objects, in and of themselves are just that.  They may or may not have a value.  However, judging from The Antiques Road Show and American Pickers, adding a verifiable provenance in story adds tangible value to that object.

Is it worth telling the story behind the treasures in your life?  The answer is yes.  Whether the value comes through the nourishment to the soul, the monetary value or both, there is a value.

What kind of story do you have to rescue? Share your thoughts in the comments or email me at: nhcullen@cfaith.com

2 thoughts on “What Is Special About An Atlas Drill Press?”