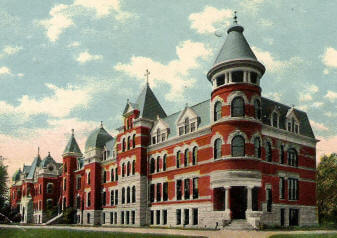 I have no special talent. I am only passionately curious – Albert Einstein on Education

Maison Steinbüchel, a Kansas State Historic Landmark and our home, is named for the family of Herman Frederick Steinbüchel , the second husband of Marie-Louise Hahn.  I have been digging into the details of the three family lines that converged and lived

in this landmark. The life of this blended family is told in the book “A Living Gravestone” by Elisabeth Guldner, Herman’s daughter.  Other posts have outlined their journey to Wichita as well as Herman Steinbüchel ‘s parallel journey to the area.

References to the education the children received in early Wichita are scattered throughout several chapters in the book.  Education is about much more than mere knowledge.  It’s impact rests on the how, where and who did the educating as much as what was studied.
Between the two marriages there were six children born.  A daughter born to the first marriage died in infancy.

Education In The Early Years

The Stackman-Steinbüchel children’s education began at home with a governess.  Little is known about who this woman was, her exact duties or for how long she worked with the

children.  Poking around census and city records has not revealed any details and likely will not, as the records of the 1890 census were for the most part, destroyed in a fire in 1921  She is mentioned only once in the book when when it was stated that Marie-Louise had tried to play match maker with Herman Steinbüchel and her at one point.

Their Grammar school education was received at the Pro-Cathedral school at second and St. Francis.  It was run by the St. Joseph Order of Nuns.   In looking at this Order’s roots from France, I can’t help but think of the European influence and no doubt having some French spoken among the sisters would have connected Marie-Louise’s language heritage to her children’s daily life, if not her Lutheran faith.

At some point when the household was becoming rather over grown with five children, it was decided the three older ones would be sent to boarding school.  The two girls were enrolled at Mt. Carmel Academy on the western edge of then Wichita.  Friz, (Frederick Charles) was taken to the Catholic Christian Brothers in St. Joseph. Mo.

Bertha, the oldest would have been about 13, Friz, 12 and Elisabeth 9 years of age.  Friz attended school in Missouri for one year as the climate did not agree with his generally frail health.  He subsequently attended school at St. Mary’s Christian Brothers College in Oakland, CA.
Bertha was five years at Mt. Carmel and Elizabeth ten.  This was was a high-level of education for young ladies.  Families from surrounding states sent their girls to receive a quality education at this institution.  I found it notable that even though it was a mere four miles from their home, a 10 minute drive today, the girls did not go home except on holidays.  The policy was for local girls to go home more often promoted homesickness for those who lived further away.  Papa Steinbüchel  was “known for his impromptu visits to the girls in spite of the Sister’s clear annoyance with the disruption”.

Further Education For The Girls

Bertha had, in her free, time studied the piano while at Mt. Carmel.  Upon her graduation, she traveled to Strasbourg, France where she studied the pipe organ under a “renowned Professor” at the Conservatory of Strasbourg.  In her obituary it was stated this renowned Professor was Dr. Albert Schweitzer, who was at  the conservatory during this time.  She resided with Tante (Aunt) Bert and Uncle Friz, her mother’s sister and husband.  It was during this time she met her future husband Rene Marie Gouldner.
Elizabeth graduated Mt. Carmel in June 1913 with a class of twelve girls.  The book states that Elisabeth traveled to New York “in January” to attend the Damrosch Institute of Musical Art.  which became the well known Juilliard School.  She studied with William Thorner of the Metropolitan Opera Company.  Which January she arrived is unclear, as is for how long she stayed.  It was here she met her first husband, William Brien Wilson.
There is not much more detail about Fritz’s time or experience in California.  Although all of this is recorded in the most matter of fact manner in the book, it is clear that education was taken seriously and that no small amount of resources were spent to ensure the Stackman-Steinbüchel children received the best possible of the time.  This included traveling great distances in an era when travel was no small undertaking.

The book does not outline where the two younger boys attended school.  With public education becoming wider spread and the family’s drift from their Catholic roots, they may have gone to the new neighborhood schools.  The religious aspects of the older children’s education seemed to be taken in stride.  While Herman was Catholic, Marie was Lutheran.  According to the book, they simply accepted each other’s faiths, allowed the children to be exposed to both, without undo fuss about any of it.
As I am married to an educator.  Both he and I received educations in the public school system.  My husband’s was scattered all over the United States and Europe as the son of a United States Air Force pilot.  However, I spent K-12 all within USD 269 with almost all the same classmates.

In one of those life-intersecting things, education was our initial connection to the Steinbuchel House, although we did not know it at the time.  It was my husband’s and I’s attending the University of Strasbourg, France in the 1980’s that began the connection.   It was not until 1988 and our mover to Wichita that the connection would be fully made.
So education,  is indeed, much more than gaining knowledge, although that is its core function.  It can be the thing thing that lands you square in the middle of restoring a historic home!
What are your thoughts on the role of education?  Please Comment below.

Previous: A Blended Family: The Steinbüchels and Stackmans
Next: Was ist das Steinbüchel? (What is this Steinbuchel?)