Abstract: A condensed history, taken from public records or documents, of the ownership of a piece of land. 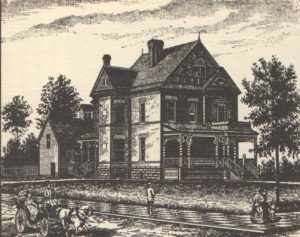 We have the original abstract of our Kansas Historic Landmark home dating back to the land grant of 160 acres from the Osage Land Trust.   It’s existence serves to preserve history far beyond  the handing off of property ownership.

In past BLOG posts, I have told how three individual lives, immigrants from France and Germany, converged in Wichita, Kansas.  How, through love, hope, taking risks and even tragedy ended up as three blood lines merged into a family for which the Steinbuchel house is named.

It took eight-teen years from the time the land was acquired via land grant, divided, plated and developed until 1905 Park Place was built in 1888.  It was another nine-teen years before the blended Hahn-Stackman-Steinbuchel family made it their home in 1907.

The land grant was to Mr. George Sharp in 1869 with the final document signed By President Ulysses S. Grant on April 15, 1873.  Over a period of 18 years the land was divided, sold and eventually plated into the city of Wichita.  Imagine, 160 acres less than two miles north of downtown Wichita!  During those 18 years, the land sales and transfer went something like this:

From 1872 until 1886, the abstract reads like a period piece on Masterpiece Classics with portions of land which included our four lots, passing between George Sharp, James Sharpe, A.W. Callen and A.A. Moore, with various mortgage transfers, tax sales and liens, marriages and designations of beneficiaries.  Legalese is not fun to read.  It seems some things never change as one needs a lawyer to understand exactly when and what happened as you read the abstract!
From what I can tell, most of these transactions were based on trading land for cash on speculation, not unlike day trading on the stock market.  The sums of money were not small.  For instance one transaction was in the amount of $2500.00.  Today that approximates $56,000.00.  Interest rates were 10%!  Goodness!
In 1886 Lee Taylor bought four lots and built what would become 1905 park place or Maison Steinbuchel.  He put up the land as collateral to build the house which cost approximately $10,000 or about $250,000 in today’s terms.  Yes, it is a nice house.

The Abstract, a Kind of Sacred Bundle

When we were handed the abstract of our house, it seemed almost sacred.  In one sense it is our house’s sacred bundle.  It is the house’s personal detailed history built upon the family’s stories who lived in.  An abstract contains all references to anything having to do with a property back to its roots.  This includes, wills and other estate documents, court transcripts involving the property and of course sales, mortgages and liens.
If there were disputes over the property that went to court, these are included.  In the case of this property there were a few of those.  Reading the abstract of our home is quite personal.  Today when one buys property, a title search is done going back 40 or so years to ensure the property title is clear of any claims.  Any juicy personal information that has been resolved is left in the past.
Of course the abstract does not document the celebrations, the weddings, parties, family dinners or peaceful conversations on the porch.  As a result, it can leave a skewed picture of how life was lived.  That is why I am grateful for Elisabeth Wilson Gulder’s book, A Living Gravestone which preserves the rest of the picture from her remembrance of things.

The amazing thing is, in 129 years there have only been 11 owners. We have been here 30 years. The only family here longer were the Steinbuchels at 40 years but that included two generations. The others ranged from 1 year to 15 or so.  In addition to meeting the descendants of the Hahn-Stackman-Steinbuchel clan, we have met all but two of the former owners:  Lee Taylor, the original owner and builder and one other who lived here in the 1960s.  Each one we met has conveyed a sense of grandeur that goes beyond the house itself.  It is as if each sensed the connection to history by being a steward of this property, even though not officially named “historic” until the 1970s.

Many have given us photos or copies of photos, bits of information about key events, even mementos of the house.  We have them all, and each is being documented and preserved as part of the houses’ story.  In fact, if someone happens to be reading this and has some photos, or bit of information, or knows someone who does, we would gladly add it to the archive.
Please help us preserve more details about this house.  Personal recollections, scanned photos with dates, times, locations, description can be e-mailed to nhcullen@cfaith.com.
Please provide feedback in the comments below.  Thank you.
Previous: What’s in a name? Maison Steinbüchel?
Next: A Blended Family: The Steinbüchels and Stackmans