“I know of no more encouraging fact than the unquestioned ability of a man to elevate his life by conscious endeavor.”  – Henry David Thoreau

Recently I explored nearby and familiar locations where a little known early Wichita pioneer and entrepreneur, Peter Stackman, lived, worked and invested.

Sparked by a re-reading  “A Living Gravestone” written by Elisabeth Guldner, containing the history of the family for whom our Historic Landmark House in named, I was reminded of how the choices and movements of people impact life.

In a previous BLOG post I documented the convergence of three German immigrant families.  These intersecting lives formed the basis for a significant contribution to the formation of Wichita, Kansas.

I also told how Peter Stackman and Marie-Louise Hahn met, married and traveled from Strasbourg, France to Wichita, Kansas where Mr. Stackman had a thriving tailoring business.  As a Wichita pioneer, He owned a significant amount of land in and near the core area of Wichita.

Prior to a return journey to Europe in 1885 where he met Marie, Peter had built or acquired the following:
He had built a farmhouse and barn on the eastern portion of the 80 acres overlooking the Arkansas River.
Marie-Louise and Peter had three children:
About the same time as the birth of their son, Peter Stackman contracted the flu and died on Good Friday, 1890 at 47 years of age.  He is buried next to his infant daughter in Maple Grove Cemetery, in Wichita.

In the short 13 years Mr. Stackman invested much into the growth and commerce of Wichita.  At the former farmstead location, now occupied by apartments, Stackman Drive is what remains.
Part of the street named for him was converted to Museum Drive in the 2000’s at

the suggestion of an outside consulting firm who were unaware of the significance of Mr. Stackman’s contribution.
Marie-Louise continued to own land in this area until the 1940s.

The Stackman Court Apartments built by Frederick Stackman, Peter’s son, in 1928 are listed on the National Register of Historic Places.

These properties reside within a mile of our home so I made an intentional visit to each one.  I drive by these spots several times a week but looking at them, more aware of the specifics, was enlightening.

Of course, I know the Museum area as we frequent these wonderful Wichita sites regularly.
The addresses in the downtown area are all either city owned or commercial hearkening to their beginnings. 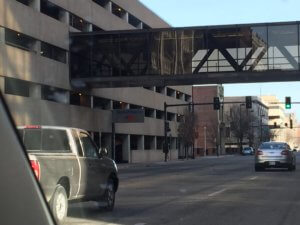 204 and 206 North Main where Mr. Stackman ran his tailoring business is now a parking garage.

In looking at each of these locations, it is noteworthy that a large portion of his properties are now occupied with some city or county enterprise.
The museums, are non-profit assets to the community, with the remainder housing commercial offices, banks and businesses.
Well done Mr. Stackman.  Well done.
Are there locations you pass by daily having a heritage worth giving voice to?  Please share in the comments below.
Previous: Three Ways In Which Love Never Fails
Next: Fun And Curious Facts About Leap Year

2 thoughts on “A Forgotten And Lost Wichita Pioneer – Peter Stackman”