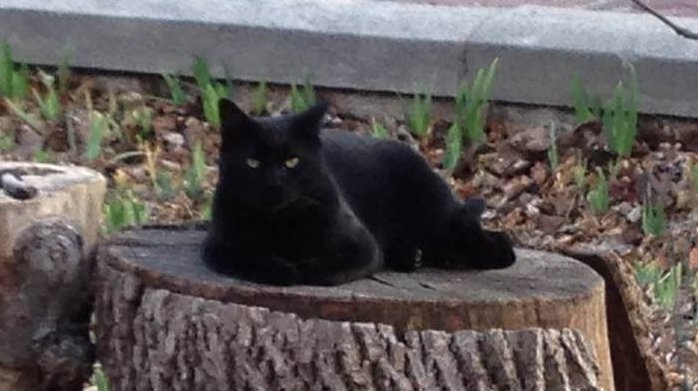 At Maison Steinbuchel, we have cats.  Over the years, the number has varied from two to seven at a time.  I know the latter puts us dangerously close to the crazy cat people category and to be frank, seven was a lot.  We have a big house, so we have had upstairs cats, downstairs cats and outside cats.

Let me be clear, no matter the number, we take care of them.  They are fixed, receive annual vaccinations, regular flea treatments and are cared for should they get ill.  In other words, they are a line item in the monthly budget!

Things are cleaned daily so ours is not a house that says “cat” when you walk in.  We are now down to two up and two down stairs kitties. It’s been a rough year with three tearful goodbyes, but two of the three were fifteen years old, Buck the cat, was only six.

Buck the cat put us at seven for a few years ago.  He, like several others, just showed up.  My husband has a serious soft spot for kitties.  He is a born cat whisperer and the more difficult the cat, the more he is challenged.

I have watched him do his whisperer thing and turn cat mental cases into loving, sweet cuddlers.   Buck was not a mental case, but he was undernourished and starved for affection.

The Arrival Of Buck The Cat

Buck the cat, appeared in our yard in the fall and was content to be an outdoors kitty.  We had him fixed and marked as a stray by our local Friends of Felines who aged him at about four years of age.   I was Ok with this.  However, the day my husband named him, I knew we had a new member of the family, BUT he would be an outdoor kitty. RIght?

Also called Mr. B and Buckey, at first he seemed to get along with the other cats when they were outside.  Buck was content to hang back and observe.  Little did we realize he was getting the lay of the land looking for his place in the pecking order.

He chose our other black cat, Midfield (Middy) as his mentor.  Buck followed Middy at a distance scoping out favorite napping places and they would sit nose to nose in the shade, like bookends, several feet apart.

Middy tolerated Buck as long as he kept his distance.  For the most part, Buck ignored the two grey tabbies, Flywire and Strut, as they gave him the “beat-it buddy” hiss and growl routine.   However, he did tangle once or twice with these two so we got good at breaking up cat encounters.

Buck The Cat In Love?

That winter was very cold with temperatures well below freezing, so we had to figure out the sleeping arrangements for Buck inside.  It was during this time, we got to know Buck’s two-sided nature.  He was a cuddler, but not with the other cats.  He wanted us to himself.  When we were outside, he followed us like a pup, and if the other cats came near, they were made to feel most unwelcome.

However, Buck became quite enamored with Wings, the calico female.  She was at least 10 years his senior and, of course, fixed, but Buck was smitten.  He followed her around like a duckling.  It was  comical – You would spot Wings headed across the yard, and six feet behind,

Buck trotting along.  Wings would have none of it, stopping to give Buck a go-away hiss when she was tired of his tagging along.  We never saw them tangle.

Buck was a screamer more than a meower.  When:

Shortly after Buck was upgraded from stray to a member of the family, we took him to our vet for the usual shots and check-up.  Since he seemed healthy as a horse, so we chose not to do any tests.  However, in a year or so Buck started having respiratory issues and we found he had feline leukemia.  Still he did well for another season, but the second winter, his compromised immune system left him vulnerable to a virus and he died.

As an unneutered male of four years of age, it would have been wise to have him tested before bringing him into our fold.  There is no telling how many alley cat fights he had been before he arrived in our yard.  Since our cats all tested negative for the virus, he no doubt had this when he arrived.  I am sure he lived longer in our care than he would have on the streets and since he was not allowed to wander far while with us, no doubt other cats were spared being infected.

Still Buck was a fun cat.  We still smile at the memory of his antics.  His screaming, thumping, flopping and snoring along with his need for human companionship made him a special fur baby at Maison Steinbuchel .

What are your favorite fur baby memories?  Please share in the comments section.

Previous: What Is Fear And How To Beat It
Next: How To Tame Time Like An Air Traffic Controller

One thought on “What Screams, Snores And Thumps? Buck The Cat!”