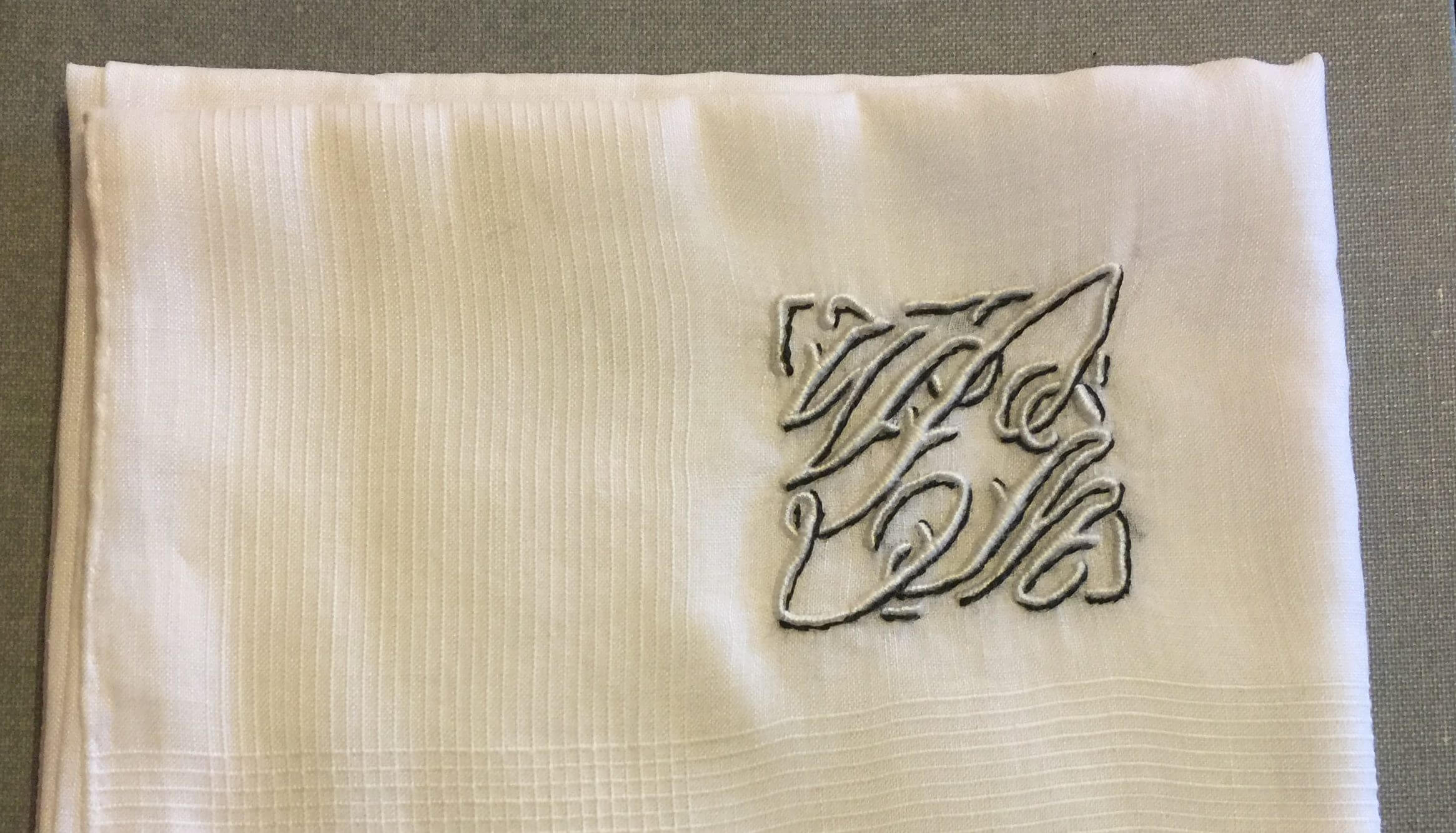 “He produced a handkerchief—crisply folded—and handed it to her. She took it with silent astonishment. She’d never before known anyone who carried a handkerchief.”
― Cassandra Clare, City of Bones
Nothing shows both polish and utility like the nattily tucked pocket handkerchief or ‘pocket square’ in the breast pocket of a man’s blazer, sport coat, or suit jacket. – Roger Stone
One of our summer breaks this year was to attend the reunion of my husband’s mother’s parents family.  His maternal grandparents:  The Warfield Monroe Lewis – Emily A. Bertch clan.  Of the approximately 75 living descendants, 50 gathered in Denver, Colorado for this occasion.
It was over a year in the making, with four generations and six states represented.  The Colorado contingent were awesome hosts making sure we were fed well and provided options of activities around which to enjoy each other’s company – of only in cars going to and from sites.

People brought photos and mementos to share.  One branch of the family custom designed t-Shirts with the family tree up-to-date with the most recent arrivals.

In all of that one of the most precious mementos we received was a monogrammed handkerchief from Colonel Warfield Monroe Lewis’.  It had been carefully preserved by one of the aunts.  Granddad Lewis had these custom-made while stationed as an Army office at The Presidio.  San Francisco, CA.

Born about 1897 in Michigan, Grandpa Lewis graduated West Point in 1917.  His class included:
Col. Lewis was just two years in trail of the West Point class of 1915, known as “the class the stars fell on.“ Over one-third of this class became generals, including Omar Bradley (who commanded the First United States Army at Normandy and later became one of only nine men to ever be promoted to five-star rank) and Dwight D. Eisenhower, another five-star general and later, President of the United States.
Col. Lewis taught mathematics for a time at West Point in the early 1920s, arriving just as General Douglas MacArthur was completing his term as Superintendent of the Academy.
As I write this summary of this man’s career, I pause and say “thank you for your service” to all who protect this great nation.  It is on the shoulders of this kind of people we stand.

In September of 1917 He married Emilie A. Bertsch.  They had seven children, three of which are still living.  Two were able to attend this year’s reunion.
I never knew granddad Lewis, but I did get to know my husband’s grandmother Lewis during our years in California.  With her role as the wife of a West Point Army officer, she was as close to an American aristocrat I have known.  I was terrified to meet her the first time.  However, she took a liking to me and we got along.   I learned a lot from her about proper social conduct:  China, crystal, fine linens, and family heritage.  She didn’t preach, to me but she did set an example.  It was just the way she lived.
One of my favorite moments in remembering Grandma Lewis (and there were many) was at an annual Lewis Christmas gathering.  These usually took place the evening of Christmas Day after individual families had celebrated on their own.  The party was well underway, and Grandma Lewis was sitting quietly in a chair observing all of the commotion in the room.  Now in her 90s, she was quite contemplative.  My husband observing her silence, asked what she was thinking.  Her reply with a slight glint in her eye, was “I can’t believe I am responsible for this entire mess!”

As I looked at that handkerchief, and all it represented:
I was honored that we were given such a treasure as a touchstone from which to remember and be grateful.
The legacy represented in Denver, Co included:
to name a few.

Of course along with all that, they are Moms, Dads, Grandparents, Great-Grandparents – family.  I hold it dear to be a part of this family.  It has added to my own heritage in ways unexpected and special.
I am farmland and dirt, David is military aristocracy.  His family story has enabled me to appreciate mine at a deeper level and to give the story substance by writing it down one bit at a time.
Every family has a legacy of some sort and flavor.  What have you discovered about yours?  How did you discover it?  Please share in the comments below!