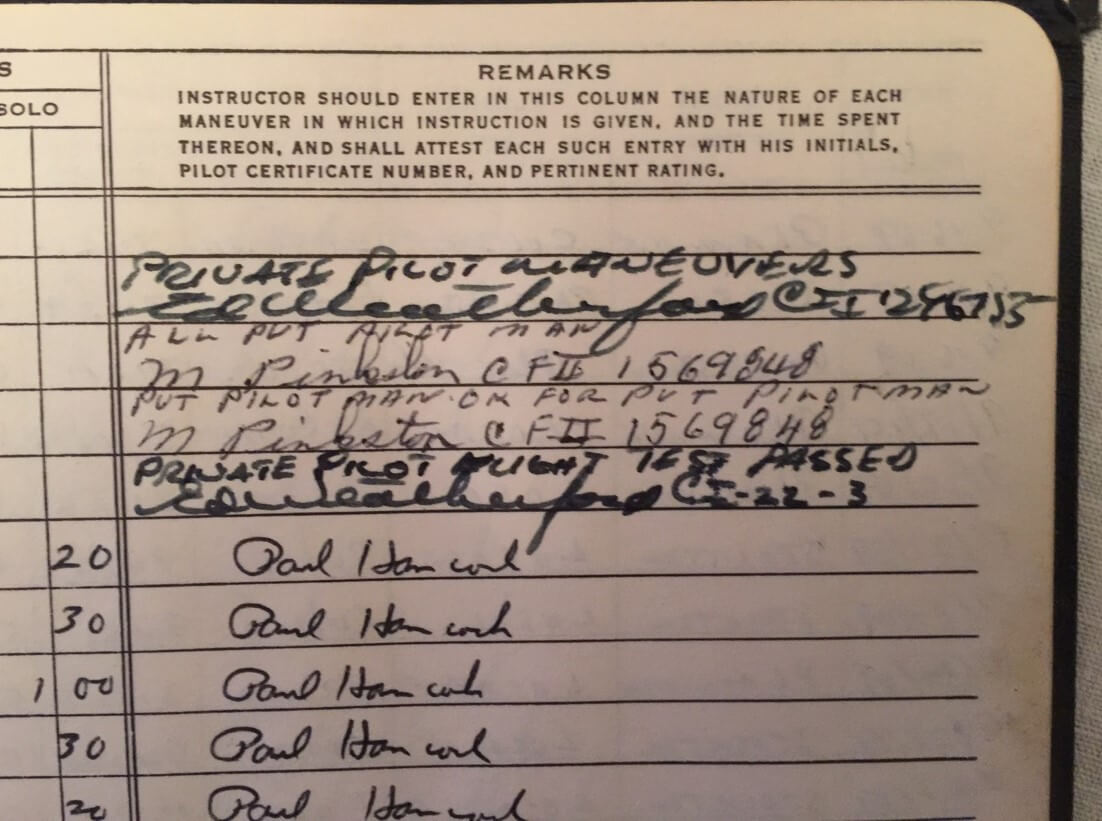 “Worse than not realizing the dreams of your youth would be to have been young and never dreamed at all.”  Jean Genet

Acquiring a private pilot’s licence in the United States is fairly straightforward:

The details, and there are some, are spelled out in 14 CFR Part 61, Subpart E – Private Pilots

Options To Get You There

To get through this process you will need some help.  How much and from where depends on your individual situation.  The basic ingredients you will need are:

The first one is generally done through some kind of ground school course either online or in a class/seminar situation.  Costs vary widely and there are pros and cons to every option.  You can study on your own as well,  however, your base knowledge and learning style are also factors.

Second, an airplane.  Not all rental aircraft are allowed to be used for flight training, due to the extra wear and tear, risk factors and insurance limitations.  It’s up to the owner.  There are flying clubs and flight schools to access aircraft or you may even have a friend who is OK using their plane to learn, but their insurance must be in the loop.

Third, flight instructors can be hired individually or through a flight school.  Some flying clubs not only have aircraft, but instructors as a part of their community as well.  Ask at your local airport Fixed base operator for recommendations.

Most flight schools  can take you from start to finish with all the elements arranged, steps laid out and support systems in place so that your progress is done efficiently as possible.  Again costs vary widely.

Then there are the “do it yourself” training plans.   My father’s and my own are a couple of examples.

Daddy learned to fly “by the seat of his pants” as they say.  This was in the late 1960s in western Kansas.  Hanging out with local pilot friends at the local airport, taking advantage of right seat “stick” time, although not logged as  training, was valuable when formal instruction time came.

He never attended ground school.  It cost too much and required driving 30  miles to attend classes.  He was self-taught from a set of books I have since inherited and even used as part of my training.

HIs flight training with a CFI was minimal since he did get  a fair amount of practice with his pilot friends.  Plus, he just had a knack for flying.  A little red Forney Aircoupe was a key element in his learning.

Daddy was a good pilot, but had difficulty articulating his knowledge in the form of the FAA’s oral and written exams.  None-the-less, after several attempts those qualifications were met.

His first lesson was at the Phillipsburg, KS airport in a J-3 Cub on October 14, 1962 and his last logged flight was from the Plainville airpark on September 21, 1981.  Most of the hours flown were in Aircoupe N3052G.

My Path To Flight

I became a certified air traffic controller before I was a pilot.  I had wanted to learn to fly but, like my dad, money was a factor.

When I entered the FAA Air Traffic Academy in Oklahoma City, November of 1976 in  it was with a substantial raise in income.  This seemed to be a great opportunity to acquire my pilot’s licence as I went through air traffic training.

The base knowledge of airspace, weather and laws of physics applied to both occupations.  There were several airports conveniently located.  I found an airplane, a flight instructor and logged a few hours of instruction.  However, Oklahoma winter weather and the need to focus my air traffic training required a choice.  I chose to focus on my air traffic training.  After all, that was my job!

I was not able to pick up my flying dream until I moved to Wichita, KS in 1988.   My previous air traffic posts in Denver and Los Angeles, the air traffic strike of 1981 along with personal commitments didn’t make room for flying lessons.

Wichita was a perfect situation. So I began.  I, like my dad, studied on my own for the FAA written exam.  I borrowed the King tapes from a friend to be my personal tutor. The base knowledge needed about airspace, weather and other systems are the same as for a pilot, yet the perspectives are different, so self-study was needed.

I was allowed some study time while at work, and able to take and pass the written exam on the first try.  Only one missed one question:  VOR Navigation.  That was solved that by removing the VOR from the Aircoupe and replacing it with Loran C (later a GPS)!

There were a couple of Cessna 152s for rent for fight training located at the Fixed Based operator (FBO) at the base of the air traffic control tower.  What could be better?  I either got off a day shift and flew or did so in the morning before a swing shift.

Of course I had all my air traffic colleagues working the tower to critique my sessions along with my CFI wo was one of  those fellow controllers.  Humility is needed for flying lessons.  I soloed on…. and acquired my private certificate on….

Daddy was my first passenger on July 4, 1992 from Newton Kansas to El Dorado and back.  It was the Ercoupe Owners Club National Convention.

So there you have it, a multitude of options from DIY to flight school for gaining a pilot’s licence.  The point of this post is to say, if being a pilot is on your list of desires, you can custom make your own path.  Yes, there are milestones you must meet, but how you get there is wide open.

Any pilots reading this, what were some variables in your training plan?  Please share in the comments so we can all benefit!  Don’t forget to subscribe.

Previous: How I Witnessed A Delayed Dream And Vision Fulfilled
Next: How To Resurrect An Airplane In Style