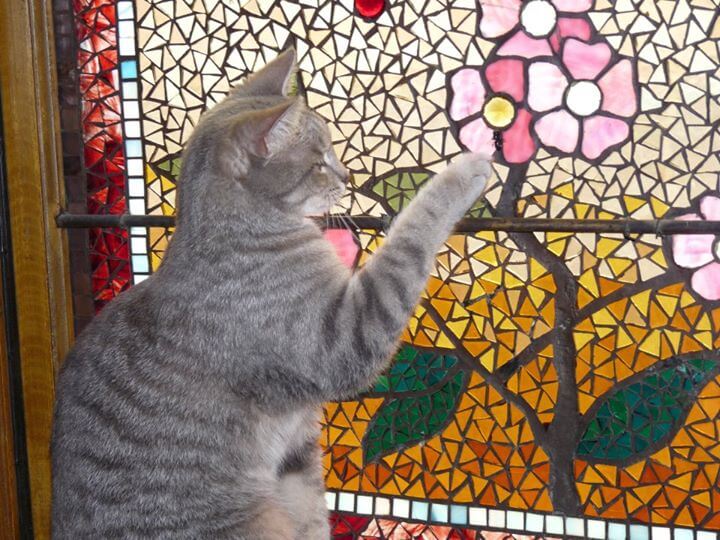 “Color is to the eye what music is to the ear.: – Louis Comfort Tiffany

At the first turn of the curved front staircase in our home is a stunning Tiffany style mosaic stained glass window.  We first laid eyes on it the summer of 1987 when we traveled to Kansas on a “pre-house hunting” trip.  A job transfer was in process and we could not wait to begin shopping for our new home.

We were told by the current owner that the window had come from France as a wedding gift for the eldest daughter, Bertha Stackman from her husband-to-be, Renee Gouldner*.  As we have lived with this beautiful window, we wanted to know more.

We had local experts visit, pieced together bits of information from various articles and books, including a letter from one of the owner’s in the 70’s referring to the window as a “tiffany style”.

Local newspaper articles about the house perpetuated the wedding gift story, but the pieces simply did not fit. The cornerstone puzzle piece came from a book about the Steinbuchel family.  It mentioned the window in the house when the family took up residence in 1907:

“The wide staircase ran toward and then up the north wall and low at the first turn a small leaded glass colored window of flower design decorated the wall.” – P. 89,  A Living Gravestone, Elisabeth Guldner*

The wedding gift story was coming apart.  As for it being attributed to Tiffany, there are no markings to validate this claim.  Indications are that the window was installed in the house as it was built in 1888.  But where did it come from?

Although the book described the window as “leaded” stained glass, the window’s construction is quite different.  Some experts say a copper foil stained glass process made up the window, but in further examination, that too didn’t quite hit the mark.

My spouse is the consummate researcher.  It was his efforts that finally solved the mystery.  At one point, he searched for “mosaic stained glass windows”. Mr. Google brought up a website for the Corning Museum Of Glass.  Residing in the museum’s collection is a window resembling ours.  The description of its construction fit ours’s to a tee:

“The process involved laying out a design made up of thousands of small pieces of glass on a table and then covering it with a sheet of asbestos that had been coated in adhesive, and then once turned over, with another piece of asbestos. Molten metal was then poured into this “sandwich” to hold the glass pieces in place. Windows made in this manner were extremely popular for a decade or so. Many were produced for private homes in the East and the Midwest…”

From this and further research, we have determined it was the Belcher Mosaic Glass Company that, most likely, produced this window.  In business from the early 1880’s until 1897, Beltcher patented this breakthrough process August 12, 1884.  Thus, making Tiffany style windows more affordable and available to the masses,  The company was located in Newark, New Jersey.

The Lore, Mystery and Truth

In another document, there a mention of Lee Taylor, the home’s builder, did so for his new bride to coax her to move from back east to Wichita.  He endeavored to furnish the house with elements imported from the east coast to sweeten the pot.

It seems that this Tiffany style window, the red slate roof and other windows in the house of Kokomo stained glass, all sourced from the east,  indicates Mr. Taylor went out of his way to entice his bride west.  She did come west for a time, as there are records of their two children being born in Wichita, as the 1895 census has them listed.

No street address is associated with the census.  Given the fact that the Taylor’s lost the house in 1892 after the real estate market crashed when the Oklahoma Territory open up in 1889, they did not live in the house very long.

Could it be that the story of Mr. Taylor purchasing this window for his bride merged into the fact that both Bertha Stackman and Elisabeth Steinbuchel were married after descending the staircase past this window?  That somehow, these stories morphed into the window becoming a wedding gift for Bertha?

Given the lore we hear about such things on on The Antiques Road Show, it is not too far of a stretch.

It is satisfying to solve a mystery, at least in part.  How the story morphed may never be known, but a house the age of ours deserves some secrets.

Am I disappointed the window is not a Tiffany? To be honest, I am relieved the window is of more modest origins.  As a Tiffany, I would have felt obligated to remove it for preservation.  As it is, it remains where it belongs as a spectacular piece of art in our home.

Is there an Object you own with a mystery attached to it?  What have you done to solve that mystery?  Have you captured the story yet?  Please let us know in the comments! Or email me at: nhcullen@cfaith.com

* Guldner is the original French spelling of the name.  Renee Gouldner added the “O” so that it would be pronounced correctly in America.   Renee’s brother Edmond, Elisabeth’s second husband kept the French spelling.