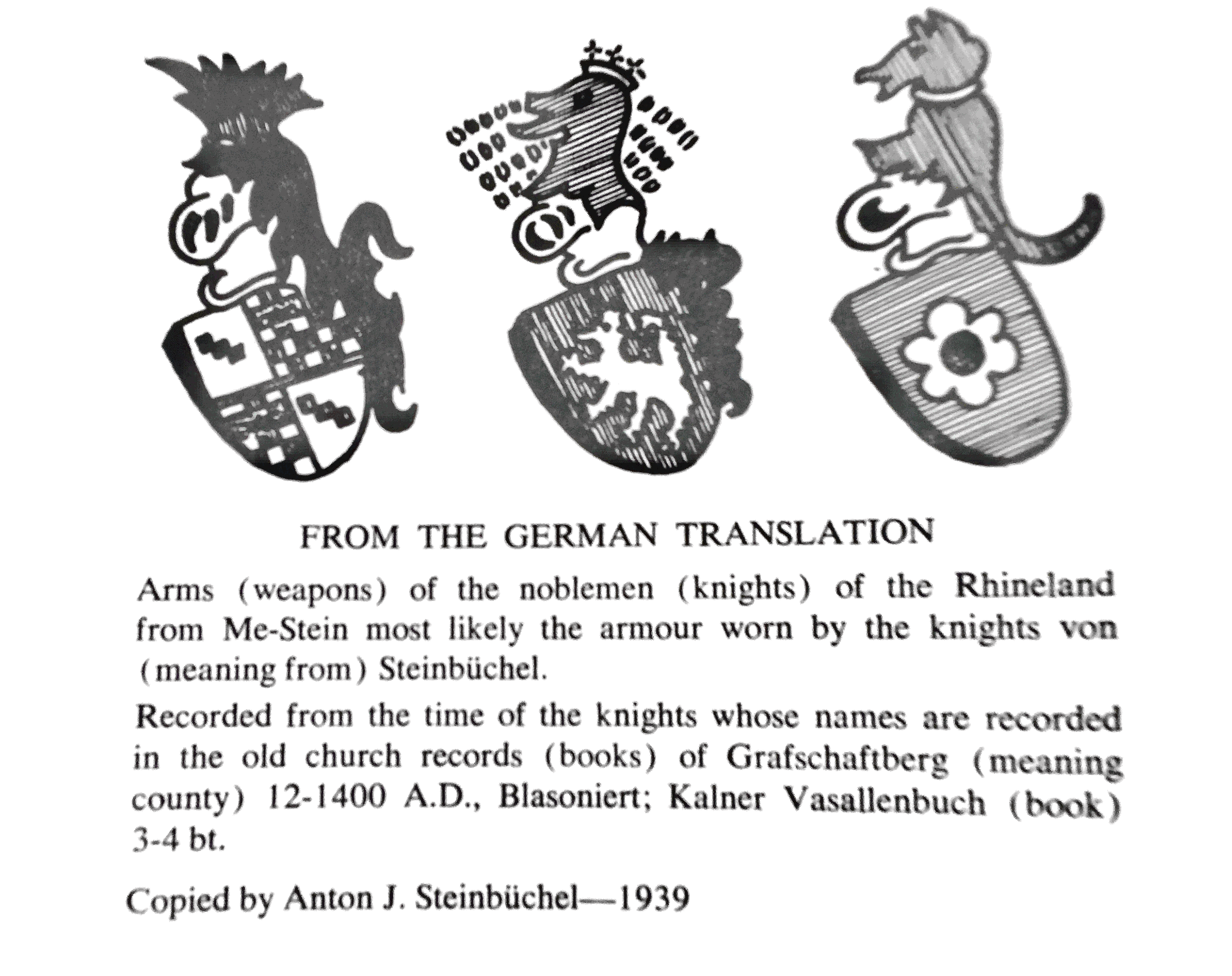 A people without the knowledge of their past history, origin and culture is like a tree without roots.   Marcus Garvey

I have been diving into the histories of the several families which converged and eventually made their home at Maison Steinbüchel.  this is the Kansas Historic Landmark where we have made our home since 1988.

I am grateful for the personal history put together in the book “A Living Gravestone” by Elisabeth Wilson Guldner, the daughter of Hermann Joseph Steinbüchel of Cologne, Germany, Marie-Louise’s second husband.  In 225 pages she covers, to varying degrees, the family history from the 1100’s up to the death of her mother in 1947.

Elisabeth wrote the book to her grand-children for several stated reasons:

As current owners and caretakers of this house, this book provides invaluable information from which to draw on.  What a gift.  The book is a perfect example of why we all, including you, should record in some way, your stories.

Pages 10-20, of the book, are devoted to the Steinbüchel ancestry.  At the time of the writing in 1973, the author simply compiled the information at hand, written and oral.  It appears to be fairly accurate, as far as it goes.
Googling  “steinbüchel” today, a wide variety of things pop up:  family names, German businesses, streets, a village and maps, etc.  So what is this Steinbüchel?  (Was ist das Steinbüchel? – imagine said with a German accent.)  It is in fact, both a family and a place – or really, places.  Unfortunately there is no Steinbüchel beer…yet.

In our preparations to move to Brussels in 1995, Max Steinbüchel, the great grand-son of Marie-Louise, whom we had met on several occasions, sent us a map of the locations of the Steinbüchel estate in Germany.  He also sent a list of contacts of Steinbüchels in the area.  It was not until in spring 1997, we were able to plan a trip to Cologne.  We wanted to locate some flatware in Solingen (a story for another time) a town just north east of Cologne.   Since the Steinbüchel estate was on the way, we hoped to find it as well.

Off we went, speaking little German, not realizing the day we chose was a German holiday.  For some reason the contacts Max had provided did not work out.

Still, we found the town and somehow managed to stumble onto the manor house.  Max told us of its existence.  It was deserted and in rather poor condition, but we found it.  We walked around, took pictures, tore the Steinbüchel page out of the local phone directory and went shopping for the flatware.  That was a bust as well.  It was not a satisfying trip – at the time.

A Knighthood near Cologne, Germany

The earliest mention of Steinbüchel found thus far via the internet is about the same era as mentioned in the book: circa 1200 A.D.  The site states in “1158 Konrad von Steinbüchel acquires a knighthood”.  Knights were essentially a private army of a King or Lord.  Knighthood in High Medieval Germany were a part of nobility and generally included land with the title.
We were unaware that the name of our Historic Home was also the name of a township near Cologne Germany.  Steinbüchel was named for Sir Konrad von Steinbüchel, the Knight to whom it was given as a part of his title.  Today, Steinbüchel is one of several villages in the area that make up the municipality of Leverkusen.

The next mention of the Steinbüchel in the book is 500 years later in 1775.  Hermann JosephSteinbüchel was born in 1945.  His father was Bernard Karl Steinbüchel (who went by Karl) born in 1811.  Karl was the son of Johann Joseph Steinbüchel born in 1775.  All were said to be from Cologne (Koln) Germany.  (I assume they were actually born on the Steinbüchel estate).
Even these many years later, the noble blood of this family remained.  Karl had an uncle, Bernard. the eldest brother of Hermann Joseph, who became a Catholic priest and eventually became an archbishop, serving in the position of Bishop of the Bruhl District south of Cologne.  Uncle Bernard oversaw the education of his nephew, Karl and thus had much influence over his well-being.  Bishop Steinbuchel’s final services were held in the Cologne Cathedral in 1846.

Opportunity on the Heels of….

Hermann was the third of eleven children who lived.  There were three who died in infancy, thus a total of fourteen were born to Hermann’s parents, Karl and Helena.  She came into the marriage with a large dowry.  Shortly after marrying, she inherited an additional sum of money when her father died.  Karl decided to retire from his jewelers business and built houses on the Rhine river, then later a retirement home in the Eifel region of Germany.
So why would this seemingly well-to-do family of German nobility decide to relocate to America?  According to the book, while working for an uncle at a newspaper and publishing house in Cologne, Hermann read accounts of the New World and the opportunities it had to offer. When his older sister eloped with a man from the village, the family intervened preventing the marriage from going forward.  Already with child, Hermann, along with his brother Karl accompanied their sister to New York.  There she was placed with Catholic Nuns to have her baby.  This was Hermann’s chance in America.

As I write this account, I realize how valuable our trip to the Steinbüchel estate was.  The links in this post to maps and the current state of that manor house, would be less solid had we not walked those places ourselves.  The fact that we walked the streets of the German Steinbüchels, and daily walk the halls in our own home of those who came to America is quite surreal.  By the way, we did get the flatware which is connected to the house as well.  As I said, another time.

Your Stories are a Gift Waiting to be Given

The goal of these kinds of stories is to spark awareness in your part of the universe. Could it be some unspoken desire, a chance meeting, a new job assignment might be a seed of something greater?  As I dig around in these photos, re-read the book, reflect and compare, I find myself in awe.  I am enriched today,  aware that many of these past events were almost prophetic in tone.
This story has more to tell.  What about yours?  What will you record today?  Perhaps an outline or bullet points?  Key events?  What would you tell your grand children?  What would you ask your ancestors if they were still here?  Please comment below.  Don’t forget to subscribe!

Previous: Education – The Stackman-Steinbüchel Children
Next: Making Difficult Choices – How They Become Easier