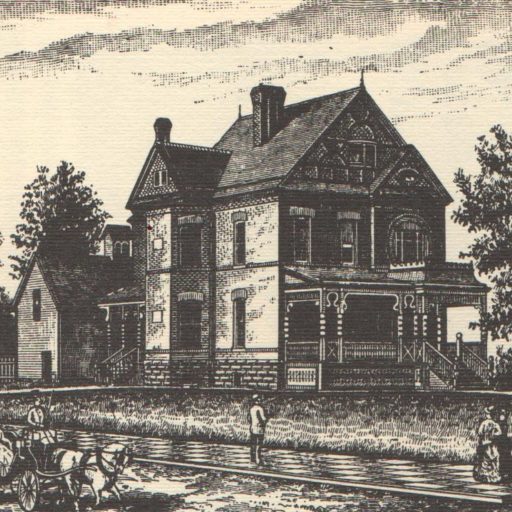 Scandal makes for juicy drama but is rarely an attribute we aspire to in a family.  Nonetheless, the actions of others, even those close to us, can land us in, the middle of notoriety we did not anticipate.   In a previous BLOG post, I began the story of Gabrielle (Gaby) Gouldner, the youngest sister of Renee and Edmond Gouldner, sons-in-law of Marie-Louise Hahn Stackman Steinbuchel.

Gaby, lived in our historic home with Dr. Renee and Bertha Stackman Gouldner, Marie’s eldest daughter, after she immigrated to the United States.  She remained here until her marriage to Herbert Powell, the only son of the then-mayor of Wichita.  It seemed a suitable match for a society conscious family of some standing in the community.  They had a daughter in their second year of marriage and all seemed as it should be.  Then it started to unravel.

Herbert accused of running out on a $100 debt, went missing without a word to his wife.  Indications are he was rather unstable and often disappeared without warning.  Newspaper accounts indicate the couple was not happy.

Her passport application and photo in May 1921 indicated intentions to visit relatives in France, just a few months after their marriage.  However, finding herself with child, the trip did not occur until after the birth of her daughter Marie-Lorraine.

Gaby was homesick.  Giving her daughter the middle name of Lorraine indicates how much she missed her beloved Lorraine region of France.  Gaby went to France with her young daughter as a ship’s passenger list shows a return trip October 19, 1926, with both the girl and Gaby, as Powells.  They were sailing back out of Liverpool. Their Wichita address is listed as the Shirkmere Apts, which were only a few years old at the time.

Interestingly, Gaby’s in-laws had been over in Europe at the time as well, returning to the US just ten days earlier.  I wonder if grandma and grandad were on a mission to retrieve their only granddaughter?  Whatever the intent, Gaby returned long enough to sort out the parting of ways with Herbert, then returned with her daughter to France in 1927.

An article in The Newark Advocate (Ohio) on November 11, 1950, says she returned to France after the death of her husband, Herbert.  This could not have been the case since Herbert did not die until 1935 and her return to France was in 1927.   Since she married Jean-Pierre Tritz in October 1928, a divorce must have occurred.   However, by the time this article was published in 1950, it was no doubt easier to blur the timeline and avoid awkward questions.

How and where did Gaby and Jean-Pierre meet?  Had they known each other from childhood, or met during her extended visit in the early 20s?  We do not know.  No matter how or when they met, they shared a passion for France and its future as an independent nation.  They eventually joined the French Resistance.

The French Resistance And Prisoner Of War

After assisting hundreds of refugees from the province of Lorraine to escape, including many young men in process of deportation to Nazi work camps, Gaby was captured.  She spent 16 months in German concentration camps, ultimately held as a prisoner at Ravensbrück in North Germany.  She is listed as: Gabrielle Tritz nee Guldner (29 December 1929) Alsace.

For her services, during the war, she was awarded numerous medals and citations by French, American, and British authorities including the Medal of Freedom and Croix de Guerre with a star.

After the war,  in 1946 Gabby returned to the US with her two children.  She again lived with Dr. Reni and Bertha Gouldner, but this time at the Clapp House, on Wellington.  She spent time traveling and lecturing eventually settling in New York where she died.

Her son Jean-Piere (John) came to the US in 1947 and attended Wichita State University in1948.  He lived with family on North Waco and with the Gouldners on Wellington.  He became a naturalized citizen in 1953.

What a journey!  This story evokes many emotions and raises more questions than it answers.  In the midst of what might have been simply reacting to scandal and circumstances, I sense a lot of courage and purpose in the life of Gabrielle Gouldner Powell Tritz  What I have discovered leaves me hungry to know more.

What is your reaction to the twists and turns of this story?  Please comment!

Previous: Research Is What I’m Doing While Figuring What Out What Inspires Others
Next: What One Thing Never Fails? Love, The Eternal Kind