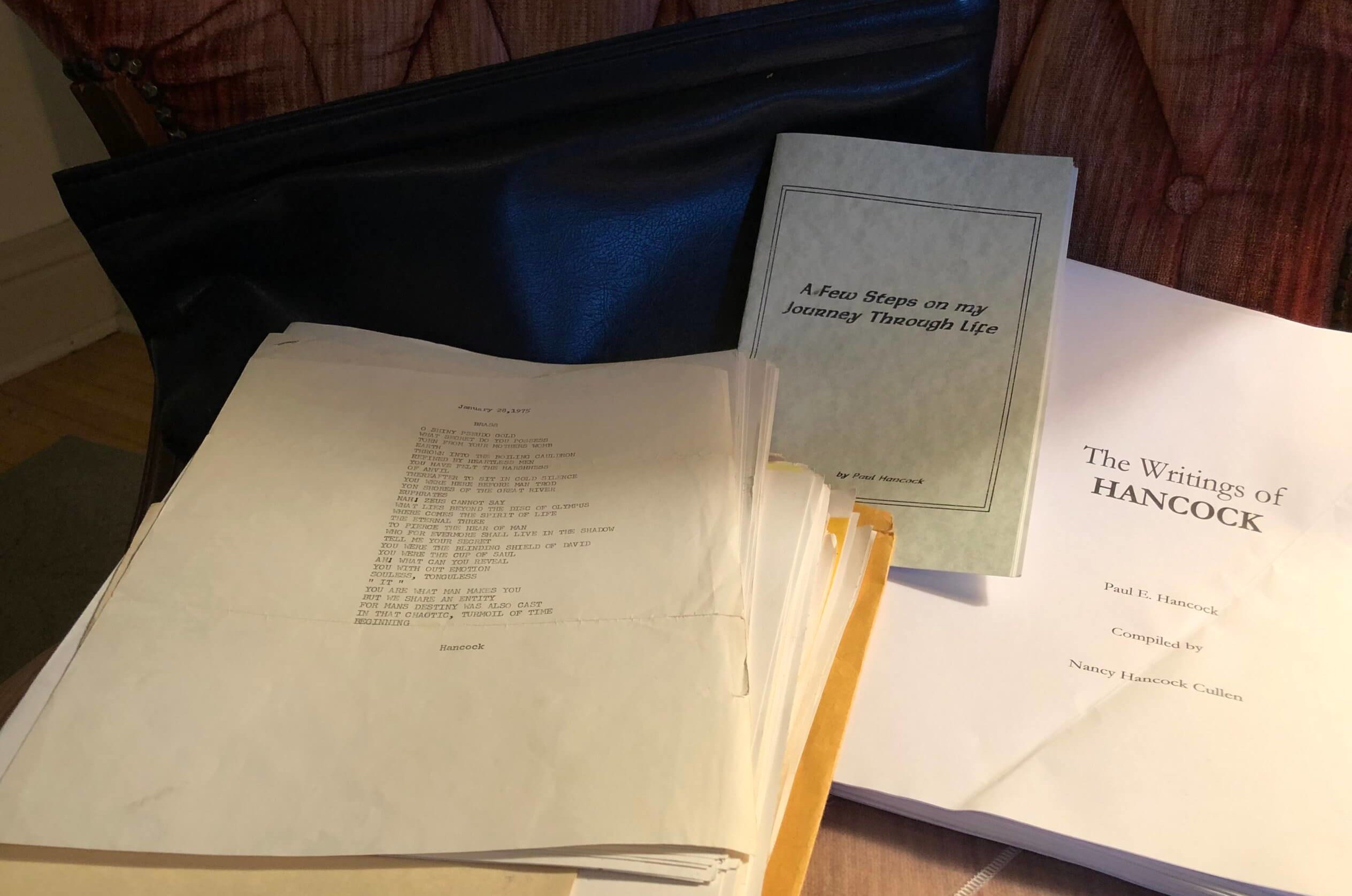 “and so it is with God, this is the place where faith comes in.  Knowing something is right but not knowing just how it fits together or even maybe even why.”  …from The Writings of HANCOCK , Error & Faith

There is a sacred rite among Native American people to have a member of the tribe record their history.  This was someone who documented, usually in pictorial form on an animal skin, significant events of the tribe.

In some cases these skins were used as the wrapping for objects used in religious ceremonies into a sacred bundle that was passed down through generations.

The Sacred Rite Of My Tribe’s Sacred Bundle

In March of 2000, my father, Paul E. Hancock moved to heaven.  For us left behind, it was too soon.  Seventy is not old in today’s world, but there are forces in this realm that conspire.  As a result, good people, like my dad grow weary of the fight.

In this case, it was a form of cancer.  One that was hard to diagnose and even more difficult to treat.  He left behind a sturdy family that has continued without him, but not without his wisdom, character, work ethic and faith as guides.

Just before Daddy died, he handed to me his version of our family’s sacred bundle.  It contained all of the ancestry research he had painstakingly gathered, as well as his writings.   I compiled his writings into a book.

Daddy’s faith, like many of his generation, was not worn on his sleeve.  It was rather a personal and mostly private faith.  He endeavored to live his faith through his daily deeds. Yet he wrote about it privately sharing those writings with a select few.

His writings told of his relationship with Jesus Christ, his constant journey of discovery and what that relationship should look like to others.  In this sense, it was a sacred rite.

In later years I had the sense that he struggled.  I suspect that had more to do with his failing health than any inner doubts.  The Writings of HANCOCK, is available on-line.

In November 1999 during one of Dad’s good days and when hope was still alive that he would be with us a while longer, Dad talked about the book he wanted to write.  He had more events, things, and people he wanted to write about and compile.  At some point later, when Dad knew he was on his way to the other side, he began to tie up as many loose ends as best he could.  One was turning over a navy blue vinyl portfolio that contained his writings.   I knew Dad did some writing, but was not aware of how much he had written over the years until he had passed and final preparations were being made for his “going home” service.

No one can finish the book Dad wanted to write, but contained in this volume is a compilation of those things he did write. Originally, it was in loose-leaf form and only given to immediate family.  This was for two reasons:  First, because at the time we thought other pieces of his written wisdom might still surface.  Second had to do with my response to his words as I compiled them, as I read through his thoughts, I felt a need to write those responses down, a sort of journal as I processed Dad’s departure from us into God’s presence.  Since the first distribution was only a few weeks after Dad’s passing, I wanted to leave room for other immediate family to do the same, to respond personally to what Dad wrote.  In any case, at that time, it was too soon for me to say, “It is finished.”

It is now fifteen years later and time to share this on a wider scale.  Dad’s grandchildren have grown, great-grandchildren are emerging, so this work is first for them., that they may know from Dad’s own hand, his thoughts, words, struggles, and feelings.  But perhaps there will be others that will relate, be encouraged, challenged, even provoked.  So we are allowing you access.”

More to Come – A Sacred Rite

There is much more to the sacred bundle than these writings.  Work moves forward in this area, albeit at a snails pace.  I have two more books in process.

In process as well is a workbook, a guide of sorts, to share with those of you who have a desire to assemble your own sacred bundle.  Let me know your interest in this.

The point of the sacred bundle is:

What form does your sacred bundle take?   Subscribe today for updates on how to assemble your own sacred bundle!

Previous: The Power Of Your Story To Impact A Life
Next: Ten Powerful Thoughts That Will Nurture Gratitude

2 thoughts on “How Rescuing Lost Stories Is A Sacred Rite”