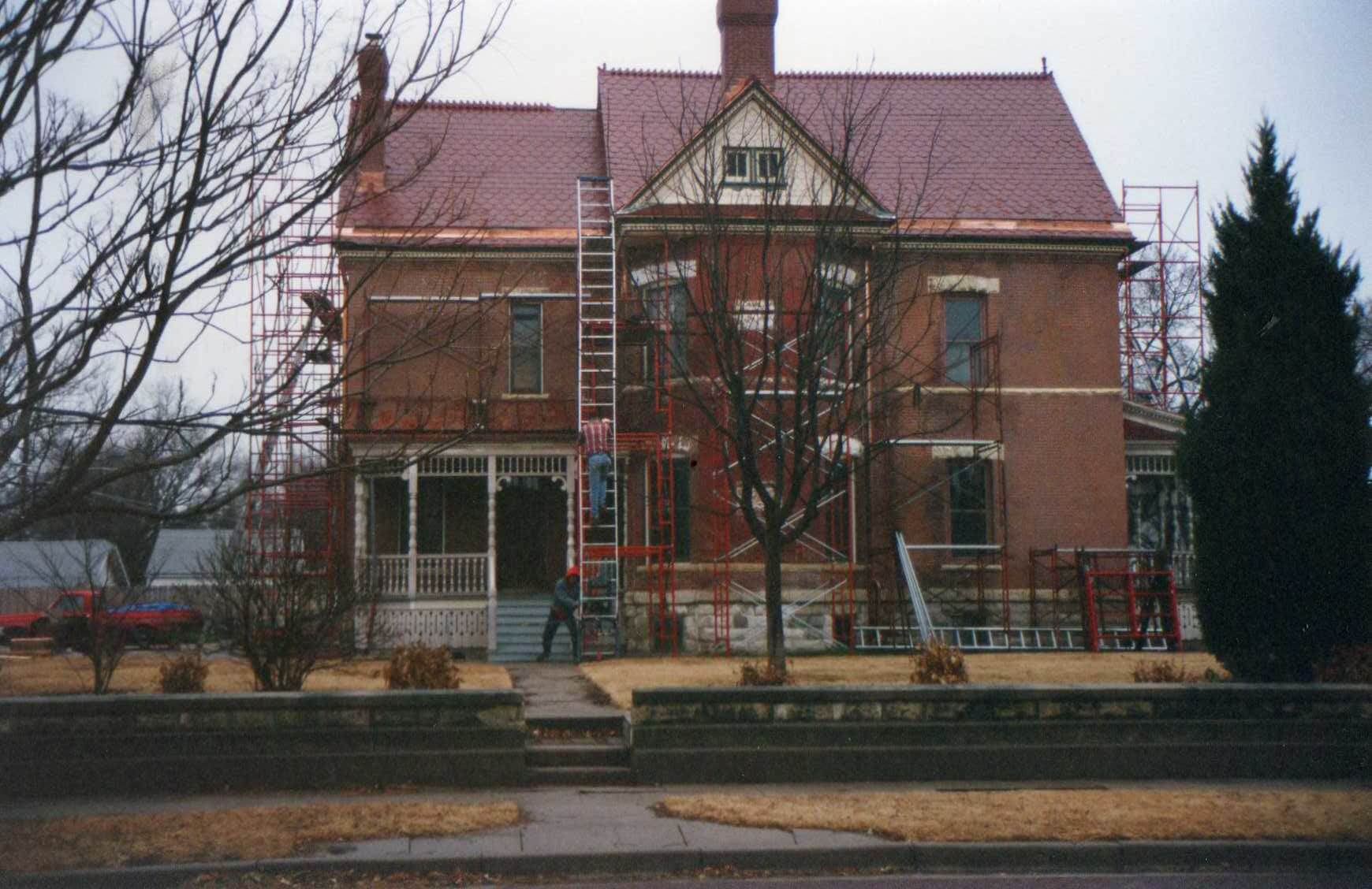 In 2017 one of the last of the Steinbüchels to live in our home passed on.  The post about the passing of his ancestor, Herr von Bernard Karl Steinbüchel, was one of the most visited posts this year.  I am pleased that in this time of loss, we were able to reconnect with several of the living family members.  Below is a partial repost.  The original post may be seen here.

Grief is in two parts. The first is loss. The second is the remaking of life. – Anne Roiphe

We recently learned of the passing of Mark Joseph Steinbüchel.  He was one of  house’s last namesake to have lived here and was one of the grandson’s of Marie-Louise and Herman.  We met he and his brothers Max and Mike when they dropped by a few times.  If I have the family lines correct, there remain three siblings who lived in this house.

Dealing With The Passing Of A Loved One

I am not fond of dwelling on death.  My Christian faith and world view regard it as simply a departure.  Yet once we walk this earth, no matter how visible or widely known that life is or is not =it matters.  It made an impression.  In fact, as I look into the Steinbüchel and my own family’s history, the more I realize the impact one single life makes.  It is for this reason, I take time to piece together the footprints left by those who have gone before.  To uncover the lost or buried stories and retell them.
For the Marie-Louise Hahn-Stackman-Steinbuchel story, my go-to guide is an out-of-print book by Dorothy Elisabeth Steinbüchel-Wilson-Gouldner, A Living Gravestone.  She was the daughter of Herman and Marie-Louise.  On page 66 of the book, there is a section, “Grandpapa’s Passing”.  Sometime in 1900 Bernard Steinbüchel became bed-ridden.  She describes his last days and the times she sat with him.  He lived with his two daughters at a house at 11th and Main next to where Elisabeth and her family lived at the time.

Herr von Bernard Karl Steinbüchel died on October 4, 1900.  Preparation for viewing and burial was conducted in the home by his son Louie’s father-in-law who owned Dunbar Undertaking.  Viewing was in the front parlor of the home.  How much preparation was done is unclear but the book states that he was placed in a gray casket with the braids of his wife Helena, who had died in Germany, beside him.  Ground coffee placed all over the house by the “Tantas” dealt with the “smell of death.
The funeral, given the times, was probably the next day.  There are several paragraphs about the funeral in the book providing a picture of the traditions of the day:
“On the morning of the funeral, the hearse, drawn by two beautifully groomed black horses, and several horse-drawn black hacks stood lined up in the dirt street in from of Tanta’s house waiting for our Grandpa to be brought out.  Mr. Dunbar and the driver in stovepipe hats, dressed in tails sat on the high seat at the front end of the hearse.  …the well-trained horses were conscious of the reins, held loosely in the driver’s hands as Mr. Dunbar climbed down to go into the house.  The black, thin, glossy whip. with its delicate tassel, rested in its iron holder at the end of the dashboard.  The sides and ends of the black, highly-polished hearse were plate glass, these were set in ornately carved frames; inside, held up at the corners by the heavy tasseled cords, were the black-fringed heavy drapes that swooped down gracefully in the centers to hide some of the starkness of the occasion, and still permit a glimpse of the elegant casket inside.”

This occasion left an impression on a seven year old girl.  She recounted the occasion some 70 years later for the book in stunning detail.  She goes on to describe the funeral procession naming the pal bearers carrying Grandpa to the hearse:
Ladies and children followerd:
The men wore black crepe arm bands and the ladies wore black dresses and hats, draped with heavy wide bordered veils to cover their faces.  White with black bordered handkerchiefs they carried in black-gloved hands provided the only color.

The procession carried Herr Steinbüchel to the red brick Catholic Cathedral  at Second and St. Francis for a funeral mass.  He was then transported to Maple Grove Cemetery and placed in the center of a Catholic-blessed plot of ten graves.

When you die, you leave behind stuff to take care of.  The first is this body we live in.  Thus, we combine tending to that necessary task with processing our own sense of loss, mortality and purpose.  In the case of Grosspapa, the viewing, procession, funeral mass, and burial served to bring personal processing into a corporate setting.  Then each return to their own pace of moving on.
The ladies continued to wear black and the men their arm bands for one year.  First this honored the one who had passed.   Second,  it let those they came into contact with that the person and/or family was processing a tender place.  It sent a message without words.

Four generations later and other has departed.  Rest In Peace.
“Mark Joseph Steinbuchel was born in Wichita, Kansas on October 2nd, 1949. Mark showed an early passion for community involvement and giving back to others, and focused on safety engineering at Wichita State University. While obtaining his degree, he served as a Second Lieutenant in the U.S. Army reserves and joined The Shriners International. Mark moved to Alabama in 1985 with Boeing to establish the health and safety program at their Huntsville plant where he was excited to contribute in a small way to the future space station. Mark also served as a volunteer CPR instructor and received the National Certified Merit Award from the American Red Cross in 1988. He continued to volunteer as a clown and offered comic relief for sick children through the local Shriners lodge, and he started the Klown Klub at Huntsville Hospital. Mark also enjoyed hot air ballooning and travelling with his 3 daughters. Mark is survived by his three daughters, Carla Lara Davis-Steinbuchel, Cara Nicole Steinbuchel, and Haley Elisabeth Steinbuchel as well as his grandchildren Nathan Wayne Davis and Adia Larah Davis and his great grandchild Ivie Alesana Davis, brother Michael Steinbuchel, sister Sandy Gray, and sister Candy Honn. He is preceeded in death by Father, Maximillian Hubert Steinbuchel, Mother, Zara Louise Manley Steinbuchel, as well as brother, Max SteinbucheI, late wife, Mary Elizabeth Steinbuchel, and grandchild, Mark Gabriel Wear McLain, sister Patricia Steinbuchel Vukic and aunt Elizabeth Steinbuchel. A memorial service will be held on Sunday, October 8th at 11am at the Grateful Life Community Church at 207 Oakwood Ave. NW Huntsville, AL 35811. In lieu of flowers, donations may be made in his memory to the not-for-profit Rocket City Clown Alley (part of the World Clown Association), Attn: President Sue Morgan, 136 South View Dr. Huntsville, AL 35806 or to Grateful Life Community Church Attn: Rev. Cheryl Birney. Berryhill Funeral Home is assisting the family.”

Previous: Happy Christmas Thoughts And Greetings From The Stonebridge
Next: Things I Did Not Know About Indonesia