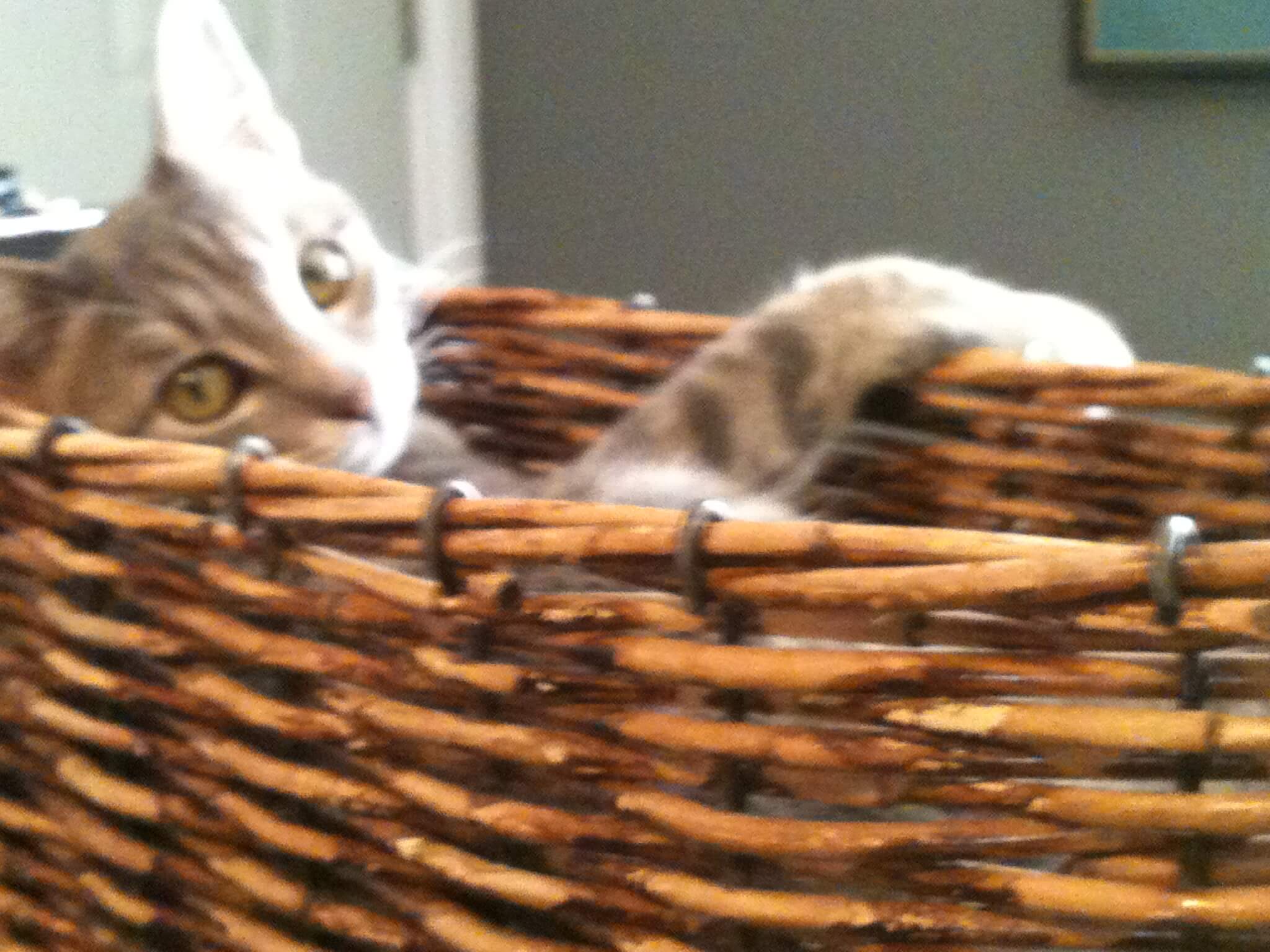 When my cats aren’t happy, I’m not happy. Not because I care about their mood but because I know they’re just sitting there thinking up ways to get even. – Percy Bysshe Shelley

Maggie came to us seven years ago in September.  She wore a green flea collar so when I saw her “Halloween Cat” a PT Cruiser to a full stop in the street, I assumed she belonged to someone.

We had just lost our fifteen year old Fluffy and were down to a herd of five kitties.  We were not looking for another.  Still, what do you do?  Here is a small five week old kitten, obviously lost, that needs help.  I put up posters around the neighborhood, posted her on facebook, etc. figuring someone would claim her.  I refused to name her so as not to get attached.  Yea right….

After a week, when there were no claims, my sister said she wanted her. She WAS adorable.  Sis named her Maggie.  I agreed to keep her until she got settled in

to a new place, then under construction.  That took a bit longer than planned, so Maggie and I became friends.  I kept my sis in mind as I trained and loved on “The Maggs”, but was secretly glad that I would have visitation rights after she left my care.

We called Maggie our Facebook Cat because instead of chasing or the usual playtime antics, she liked to “poke” the other cats, then run.  Her other kitty attributes are, to name a few:

She likes to hide.  After seven years we have found most of her spots, and can discern a bit of a pattern,  yet there are times when she manages to evade our seeking efforts.  Outdoors, her coloring is quite effective as a camouflage cover.

Maggie Goes On An Adventure

The day came when Maggie went to live with my sister and her dog Boomer.  They got along well.  Each morning, Sis would let Maggie out for her morning romp and then let her back in when she headed to work.

One morning Maggie was not at the door.  All of us were concerned and canvased the neighborhood for Maggie.  Neighbors reported Maggie sightings, but my sister’s work schedule and Maggie’s had gotten out of sync.  “Where’s Maggie?” was the constant question.

On a Sunday after more than three weeks, on a warm April afternoon my sister had her apartment door propped open and Maggie came bounding in the door with a “why did you have the door closed for so long look”!  During this time, another cat that needed a home had been taken in by my sister, and Maggie was not amused.  Sis called me and said, “come get your cat”.
There were no hard feelings but she had decided that Maggie was not suited for apartment life.  I was relieved, delighted and raced over to retrieve The Maggs.  She was not overly thin but quite spooky and smelled like garage grease.
We took her back to Masion Steinbuchel to rest and recuperate.  She ate a bit, then slept for 24 hours straight.  It seems it is hard to get a good nights sleep on the street.  After a long nap, grooming, food and water, she was just fine.  However, She had a new swagger after being on her own, but our Maggie was back.

I am convinced that kitty angels kept her safe and brought her back,  I know, she’s just a cat, but stewardship of our fur babies is a God-given privilege and we do what we can.
Today Maggie continues to make us smile when she stares and pokes and keeps us on the hunt when she hides.  We still find ourselves asking the question:  “Where’s Maggie?”.
Is there a special fur-baby adventure you can share?  Please do so in the comments below!  Don’t forget to subscribe.