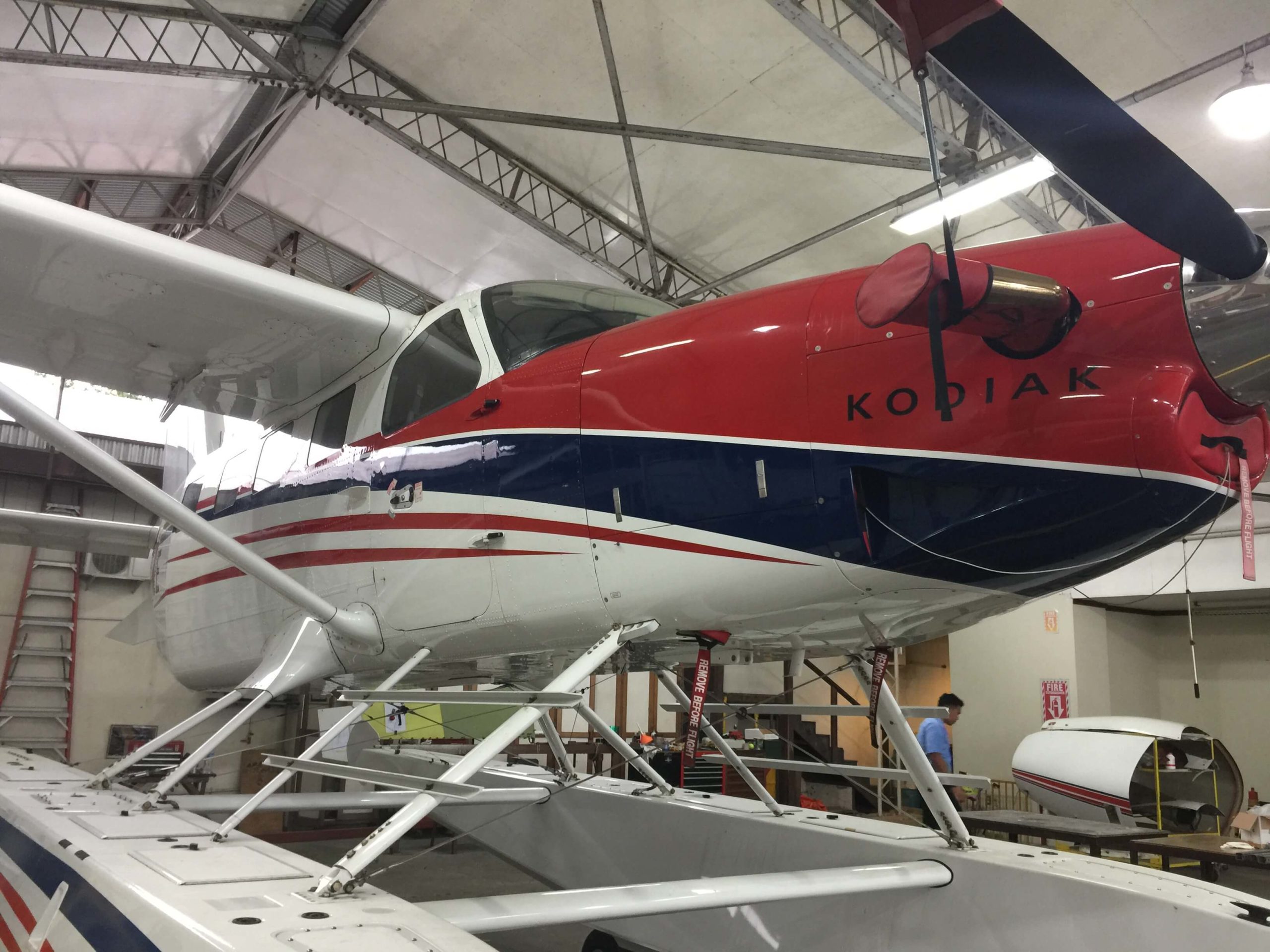 “See you on the other side”.   A closing salutation in an e-mail  from a missionary anticipating my arrival in Indonesia.

their headquarters in Nampa, ID and attending an MAF event at the airport in Wichita.  During both of these occasions I was introduced to the Quest Kodiak airplane being incorporated into their fleet.  Little did I know this particular Kodiak would precede me on an unexpected journey.

The Kodiak by Quest Aviation can take off in 800 ft. with 7,500 lbs gross weight was developed specifically for the unique needs of mission aviation.

The MAF event in Wichita was a “cold call” for me.  I knew none of the other local  supporters. At the event,  I had a warm conversation with the President and CEO, John Boyd who  queried me about my relationship with aviation in general and MAF specifically.  I gave the short version of my bio to which he responded, in a lovely accent “Nancy you would so enjoy volunteering in the hangar at MAF”.

I knew that would be the case, but in all honesty, Nampa, just outside Boise, ID is not on the way to anywhere and was not, at the time, on my list of places to go this year.  Yet, the desire got stuck in my soul and I got to take a flight in the Kodiak.  I suppose it watered the seed that had been planted many years before.

A short time later, I discovered that My mother, her brother and their spouses were going to attend an annual Idaho Rightmeier family picnic in August.  i was invited as well.  I realized I might be able to bundle these two worthy events into one trip. I applied to be an MAF volunteer, was approved to work in the fabrication shop, booked my tickets and headed northwest.
The week at the fabrication shop hit a chord in my soul I was unaware existed.  It hearkened back to the days I spent at the family auto parts, machine shop, salvage yard – except with airplane parts.  Of course Daddy had his EAA Bi-plane project setting in the shop as well, which he worked on as he could, so even that felt familiar.
Being a new kid on the fabrication block, I was eased into various odd projects:
It was energizing!  I also got a second flight in the Kodiak.  This time, we headed for the hills of Idaho and I got to see just how remarkable this airplane is on 12% plus grades and really short take offs and landings.

During the week, one of the shop overseers set me up to visit with the Advocate Wing Coordinator.  It had been suggested to me before to consider being an advocate, but the timing was not right.  Now it was.  Becoming an advocate is a process.  There is training, an interview and even a test in the form of a practice presentation that is recorded and sent in.

On the other hand, the support and materials provided an advocate is  just as professional as every other part of this organization.  I began setting up opportunities to speak right away along with my fellow local wing members.  This was going to be an awesome year.

But wait there is more!

I had just scheduled my first presentation at my local church and had a second one scheduled a week later at a school.  I had begun to make contact for other possible opportunities to speak, but life goes on, so I turned my attention to another need – grocery shopping.  As I was grabbing things off the bread shelf at Walmart, my phone rang.  It was MAF with a request so out of the blue, it took my breath away.

“Hi this is Tim.  We met in Nampa in the break room.  Your name came up in a conversation today.  We need someone to help with the aircraft parts inventory conversion at our base in Indonesia and wonder if you could help”.  (long pause while I process the questions racing through my brain).  Tim goes on to explain what is needed and why my name came up.  I am thinking:
After answering a few preliminary questions, I said, “I can’t think of a reason to say no”!  Details needed to be sorted out as to timing, visa and a consultation with  my spouse, but I left Walmart  headed to Sentani, Papua Indonesia.  Gasp! What will husband think? I sent him text.  No Response.  Hummm.  Head spinning, I drove home.  My husband came out of the house grinning from ear to ear.  I knew he was on-board.  So preparations began. I had asked for two things in the timing:

I left the day after Thanksgiving and returned at 10 PM the night before our special day.  Three weeks and two days with a lifetime of experiences, including my 64th birthday  (what a neat gift).

During my orientation, as we toured the hangar I was greeted by an old friend: the Kodiak I had first seen during my tour of headquarters in June of 2016 and first flew in Wichita.  The same one I flew in a year later during my volunteer week.  There she was with her new Indonesian name:  PK-MEK, undergoing certification for her mission in her new home.

There are several posts centering on this trip.  They fall under the “Flight” category of my Stonebridge.
My time and work in Indonesia pulled from multiple aspects of my life skills. God infused skills.  It is stunning how God does this, if we allow Him access.  Oh the adventures!

Previous: A Journey Into Mission Aviation Fellowship
Next: Through The Looking Glass Using Familiar Stones

2 thoughts on “The Kodiak – See You On The Other Side”