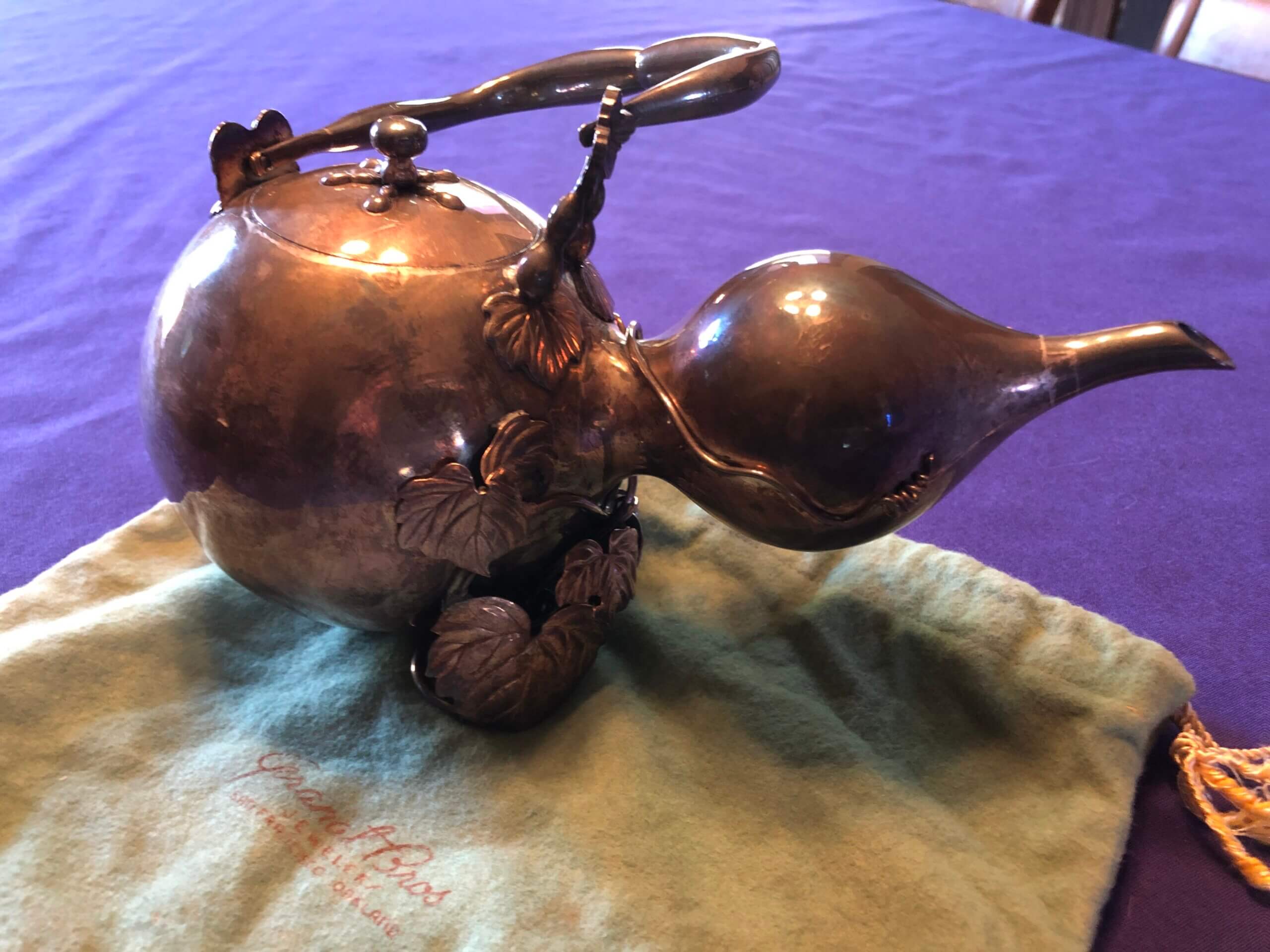 The greatest secrets are always hidden in the most unlikely places. – Roald Dahl

Objects can be a means to uncover hidden family stories and connections.  Some years ago, we inherited a family heirloom from my husband’s mother’s family – a silver plated teapot fashioned to resemble a gourd.  It was cute in a weird way, with its small dent and some of the silver “gourd leaves” missing, no one else wanted it.

Although a family treasure, it is not in my taste, so it sat for years in a soft green Granat Brothers Jewelry bag at the back of our china credenza.  There is no Granat Brothers trademark on the piece that we can see, so where the piece originated is still unknown.  Family lore, via my mother-in-law says the piece traveled with a family member around Cape Horn, but there is nothing, yet, to substantiate that claim.

My husband had written a note, containing a portion of the Tripler lineage, along with a note:  ” came around Cape Horn…” and tucked it inside capturing what his mother claimed.  The question is:  Who did this teapot originate with? Did it indeed travel around the tip of South America at some point?

There is, however, a very stylized monogram, “EAT” – engraved on the rounded butt  the teapot.  These initials belong either (or both) to a daughter-in-law,  Emilie Augusta (Abell) Tripler, and granddaughter, Emilie Alice Tripler of Eunice Hunt Tripler.  Emilie Augusta was born in Hawaii in 1844 then later lived in San Francisco where Emilie Alice (who when by Alice) Tripler, who married Bertsch, was born.

Unlike Antiques Roadshow Detectives (UK), or PBS History Detectives, most of us lack masses of time or resources to devote to these quests.  Yet,  Following a few simple steps, can, over time, help in completing these journeys.

First, like my husband did, assemble what you do know about the object.  Where you got it, from whom and any anecdotal material you heard about it.  Take photos.  Yes, you know all of this, but it is valuable to “inventory” what you know.  Do it like you were preparing to hand off the project to someone else; like you would like to have had it handed to you!

Next, do some general on-line research.  Even if this fails to lead to information about your object, you will find out what it is not.  In the case of this teapot and the bag it was in, we determined that although the bag and pot were from similar eras, it appears the two coming together was simply something the ancestor to whom it belonged, put together.  In other words, a soft bag to store a special object.  Note:  One does wonder what other object it was that DID come from the Granat Brothers!

These two steps alone, may reveal all you need to uncover hidden connections.  Again, write it down!  If nothing else, in the form of provenance for your personal insurance inventory.

In many cases, you may need to dig deeper.  For instance, we took the teapot to an antiques appraisal show locally.  Although it did not yield any “eureka” revelations, we learned it was not fine silver, but silver plate which helped date it accurately.  This dating lined up with the lives of the two women for whom the monogram could belong to. Not new information, but validation.

Don’t Give Up! When reaching an impasse, before stopping, outline next questions or steps to tackle.  In the case of the teapot:

Assuming it did originate with the daughter-in-law Emilie Augusta Abell, was there a time where she may have traveled around the Cape from the east to the west coast of the United States?  Ships records may contain a clue

I am grateful I am married to a researcher that lives to dig out these precious details.  No doubt he will discover the answers.

Following family lineage, even when names are known, can be tricky as I discovered poking through my paternal grandfather’s family some years ago.  Even with all the tools at our disposal, it is wise to cross reference multiple sources with known timelines.

A fresh opportunity to dive into the Tripler story has unfolded over the past year.  It began with a phone call I wrote about here, which led to my husband diving into the masses of photos, letters and other resources he has in the family archive.

As he sorted through these treasures, he came across letters written on monogrammed stationary.  The monogram on the stationary is very similar to those on the teapot! The letter with the monogram was written by Emilie Augusta, the mother, to her daughter Emilie Alice.   Does this indicate from whom the teapot originated?  Maybe….

In any case, diving into the archives has produced a new book about Eunice Hunt Tripler.  “A Heart In Tatters”, an annotated version of Eunice’s memoirs, has been published.  It is available by Clicking on this link.

What object in your possession has stories hidden within?  Why not dig it out and begin your journey this week?  Use the comment section to complete the first step and share what you do know your treasure!