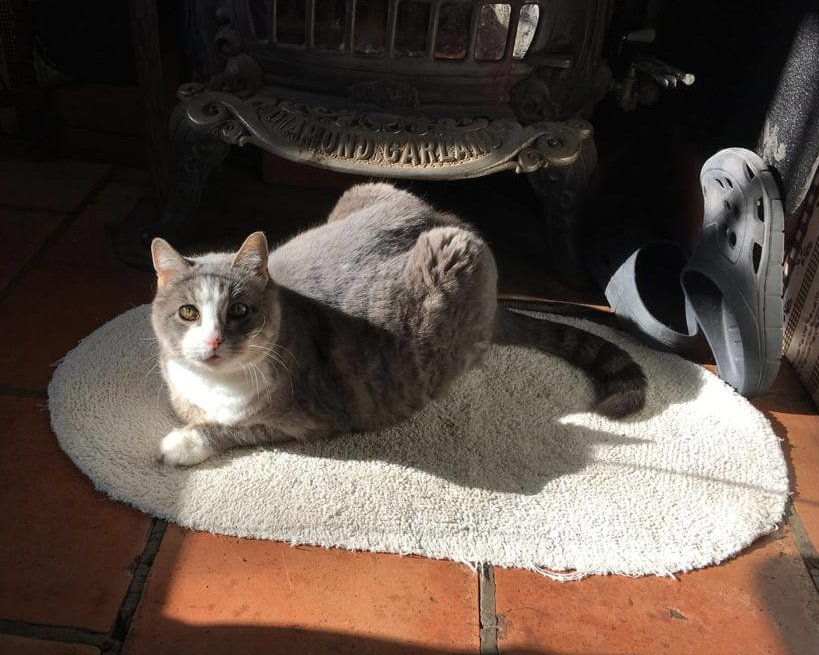 Judging from the amount of time I manage to spend watching animal videos on social media, there is no doubt we are enamored with our pets.  At Maison Steinbuchel, we have cats. For the moment four, two upstairs and two for the back stairs.  Each of the have their own Sweet Attributes, especially Strut.

Oh there are also a few neighborhood strays that pop by daily for a snack from our porch, but we consider their feeding as payment for keeping the rodent population under control around the property.

Strut is a back stairs cat.  One of a litter of three we acquired from my sister’s farm.  He and his two sisters, Flywire and Wings, began as hangar cats.  They, like the outdoor strays, made sure that mice and rats kept their distance from my airplanes.  It worked.

Some years ago, we decided to incorporate the three siblings into the gang at Maison Steinbuchel and they became the back stair guardians.

A gentle giant from birth.  Strut was twice as big as his sisters from the get-go.  At six weeks he weighed in at three pounds, while Wings was only one and a half!  He is a big lump of a cat.  Quiet, laid back and gentle.

A tad on the slow side.  He is a bit goofy and slightly slow on the draw.  We wonder about his mental acuity at times, but he seems to have managed pretty well these 16 years.  Only the site of the vacuum gets him moving quickly.  At all other times, Strut plods.

Strut has personal preferences.  In the last year or so, Strut has developed a love of being groomed and Greenies.  At certain times of day, he gets out of his bed, saunters over to me, stares at me with his big one gold and one brown eye until I respond.  It’s time for grooming and a snack.

He still thinks he he is a kitten.  When Strut pulls his seventeen pound self into your lap and turns upside down,  he is trying to fit into the crook of your arm like he did as a baby.  He seems perplexed that this does not work like it used to!

This week send your fur baby photos to nhcullen@cfaith.com!  I would love to see them.

Previous: How An Attic Is Practical While Beautifully Mysterious
Next: Why This Is A Good Time For Life Planning

One thought on “Four Sweet Attributes of Strut The Cat”