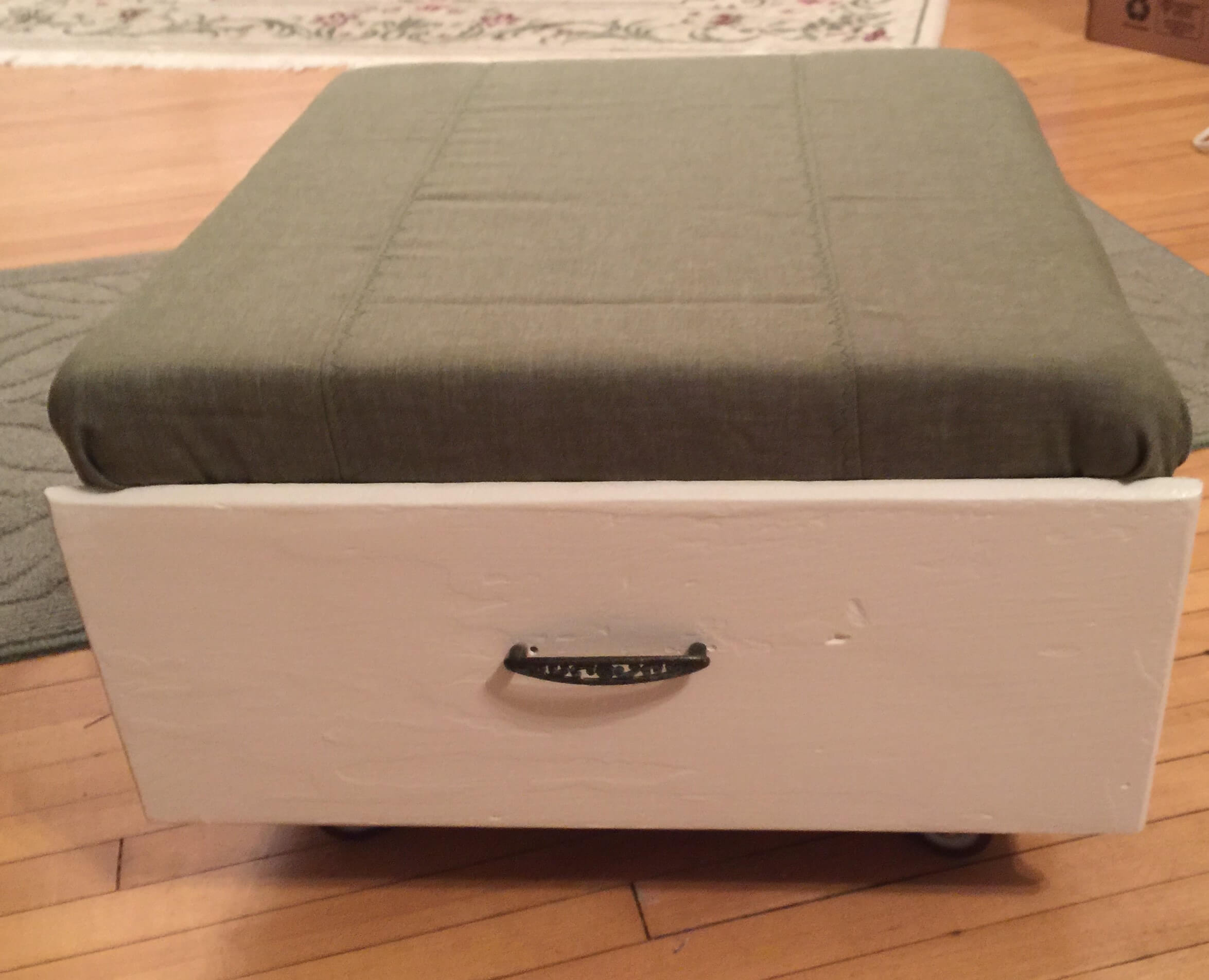 Drawer.  Noun: a sliding, lidless, horizontal compartment, as in a piece of furniture, that may be drawn out in order to gain access to it.

Origin & History of “drawers”:  A drawer is literally something that is ‘drawn’ or ‘pulled’ out. The coinage was perhaps based on French tiroir ‘drawer’, which was similarly derived from the verb tirer ‘pull’.  (16th c.)

Old drawers, or more exactly, drawers that are no longer useful as drawers but remain in tact, call to me.  If you have read some of my previous BLOGs you know a bit of my passion (obsession?) in reusing stuff.

I come by this tendency honestly from both my mother and father.  On my dad’s side, they just kept stuff because “I might need it someday”. And in some cases that was true.  Usually it just meant that things stacked up.

On my Mom’s side, the farming folk, it was somewhat the same, but the German genes forced things into something useful.  Not always in a pretty way but used none-the-less.  Nothing and no one sits idle in a German household for long!

In both cases, these things represented an asset; money and time that did not have to be re-spent.  It represented frugality and, yes, in some cases a fear of not having enough.  These were families whose psyche were formed by the years of the Great Depression.

I did not know that kind of lack.  Not even close.  Cash was not abundant, but we had nice things.  Mom knew how to re-purpose, up-cycle and re-cycle before it was a “thing”.  However, she did not abide clutter and enjoyed making things look pretty. Things in our home were neat and tidy.

When I see an old drawer my DNA takes over, times two.  It takes some skill to build a good drawer.  I am in awe of the old kitchen cabinet drawers from 70+ years ago, that remain solid and sturdy when the cabinets or cupboards that once housed them are long gone.

Not elegant and built primarily for function:  to put things in, they endure.  So when I come across an old drawer it goes into my project room.

Last winter I needed a foot rest under my desk, so i grabbed an old drawer, turned it upside down and placed it under my feet.  Functional.  Dad would have left it at that.  But my mother’s DNA kicked in recently and here is what happened:
The drawer was:

Of course the lid up-cycles this from the “old drawer” category into the “wooden box on wheels” category.

Here are a few other things that old drawers have become in the Maison Steinbuchel shop:
All of these have gone to new homes – One even to Canada!
I use some in my own home like these under bed storage bins:

My Old Drawers Pintrest Board is where I collect ideas from others as well as post projects I have done.   With the exception of paint, brushes and sandpaper, the materials are from found objects.

Pintrest along with trips to shops where others are exercising their up-cycling, re-purposing talents always spark fresh ideas.
This reusing stuff gene is a stone in my bridge handed down via DNA.  However, to be viable, it had to be recognized, nurtured and even adapted.
I do not need to do this to save cash (although that is a nice benefit), nor even to save time.  I could just toss these things out or donate them (which I do this in some cases), and tap an app on my iPhone to order something new (which I also do in some cases), but there is a place in me that is not be satisfied with that.
There are stones in your bridge waiting to be discovered, unearthed and placed in a more prominent place along your journey.  A gift of music?  painting?  Writing?  Perhaps a skill that has laid dormant or was set aside.
Some area of interest that cries in you for nurture and expression.  Something that satisfies your soul.  Give yourself permission to recognize what it is and say it out loud.  Today.
In the comments below, in one word, describe that latent something within you that you want to pursue.

Previous: Harmony in the Inner Life – Hidden Boundaries
Next: Decisions – The Hard Ones With Confidence And Peace