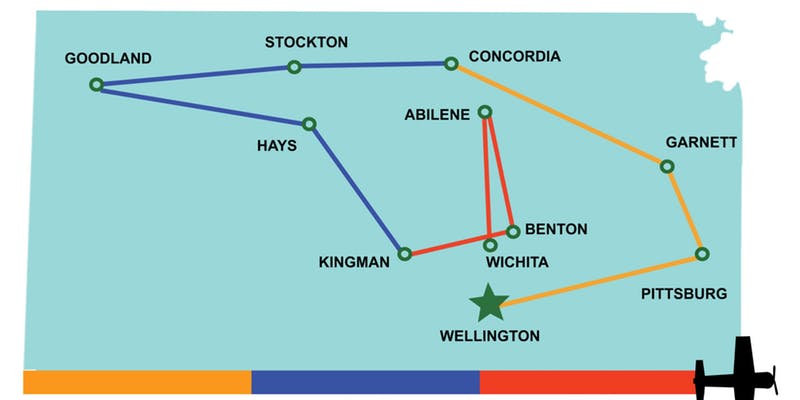 “Our greatest weakness lies in giving up. The most certain way to succeed is always to try just one more time.” – Thomas A. Edison

A couple of years ago, I heard about The Kansas Air Tour.  I was attending the annual EAA Chapter 88 Fly-in at Jabara Airport, where the tour ended that year and several of my pilot friends had just landed .   It was at that moment I decided this is something I would do.

At the time my plane was still in Texas at our hangar home and although I flew it to Kansas from time time, it was not convenient.   Still the dream to do this tour sparked.

The next year, the decision was made to move the plane home.  This one decision also made the Air Tour doable.  I contacted a pilot friend and ended up attending a meeting of the KCAE who serves as the non-profit under which these kinds of activities function.

I did indeed fly the tour, or at least part of it.   A combination of of weather, which affected most everyone on the tour, and a mechanical issue, kept me from flying the entire tour.  I did however, finish by following the tour in a rental car.

I am planning on flying the Kansas Air Tour again this year.  Unlike last year when plans got rearranged because of weather and airplane issues, I hope to give updates as the tour progresses.

So, with a few exceptions, I am following the same process as last year, listed above.  Of course the plane is here now and has been checked and rechecked.  Fingers crossed!

Please Subscribe to get updates on the 2019 Kansas Air Tour September 26-28, as well as other posts on:

Previous: Awesome News! The Biplane Baby Has A Name!
Next: An Awesome Crazy Personal Aviation Day