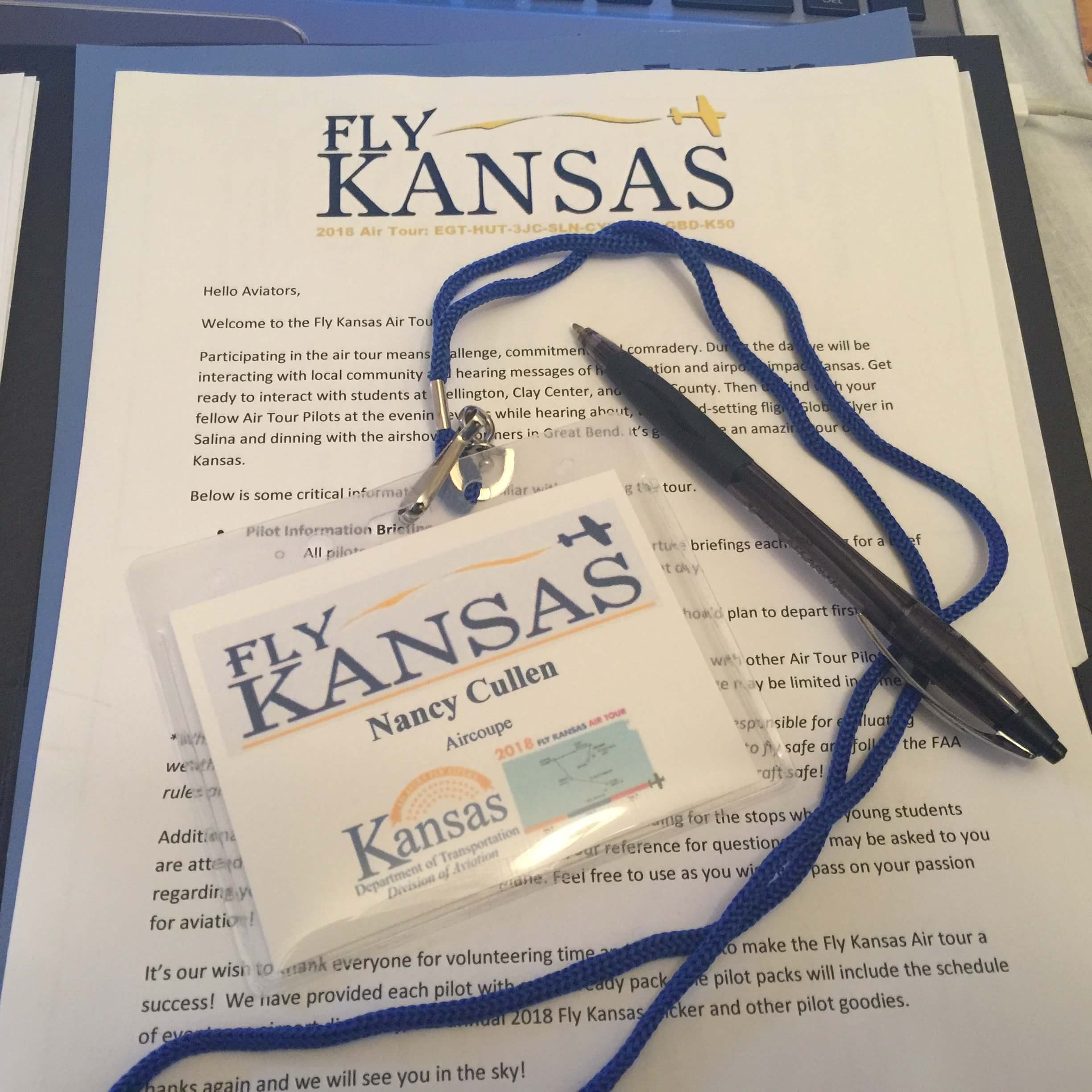 A few days ago, I participated in the 2018 Kansas Air Tour.  Flying in this event has been on my radar for two years, and was one of my 2018 goals.  To say I had planned for this is an understatement, but the morning to depart arrived.  Little did I know that early in the trip I would be faced with a difficult critical decision.

At the crack of dawn, I headed for Cook Airfield.  It was a perfect day.   I had spent the previous Sunday afternoon prepping and polishing my red coupe to within an inch of her life.  Oiled, fueled and aired up, I loaded my carefully packed and weighed flight gear into the luggage area, did a pre-flight and pulled her out of the hangar.  With the start-up checklist complete and a “clear prop” shout, I pulled the starter handle and taxied out.

The first leg of my flight was from Cook Airfield to Wellington, KS where the tour actually began.  A short 12 minute flight plus ground time got me to the ramp just after 8 AM.  I joined the 50 or so airplanes participating in the tour, the local high school band, 4th grade students and cit

y dignitaries who were gathered to kick off the event.  Compass Rose Skydivers opened the day with the American Flag unfurled from above.

At this and the other stops, students interacted with pilots as they looked at  airplanes. One young girl got a  close look at the red Aircoupe.  She was subdued during our chat but later I saw her telling her fellow students all about my airplane.  They are listening!

Next stop, Hutchinson, KS.  a short 50 miles away, I made it there in just over 30 minutes.  The extra eight turns outside Class D airspace because the controller was too busy, added another 15 minutes flight time.  We heard from the AOPA Regional Representative while here, then headed for Junction City, KS.

After a walk around and routine oil check, “clear prop” and start-up, I requested to taxi to runway 22.  A normal run-up and magneto check, but then as I pulled the carburetor heat, I felt something “give”.  When I pushed the knob back in, engine power did not come up.  I tried a few more things, and sometimes the power came up, a sometimes it did not.

This is that:  Difficult Critical Decision point.   Is this a go or no-go?   First, a bit of background:

Carb heat is needed in certain climate conditions to deal with carburetor icing.  When ice builds up the engine will begin to loose power, you need heat to melt the ice.  You also put carb heat on when landing so icing does not build up at low engine RPMs.

Then my years dealing with aviation accidents kicked in and I called ground to taxi back to the ramp.  Decision made.  I felt right in spite of disappointment at all the planning, expectation and resources gone for naught.

Before shutting down, I called the Fixed Base Operator (FBO) to have someone come out and look things over.   I then called the Air Tour frequency and let them know I would not be joining them in Junction City.

The initial look over revealed that the carb heat door shaft had come loose from the control lever.  This means the carb heat door opened and closed at will.  This would mean engine power could fluctuate and the door could even begin to flutter, or worse come loose.  Right decision.

Not to be defeated – I found someone to work on the plane, who just happen to have worked on it before,  rented a car and did the tour anyway!  I hit the overnight stops thus having a great time chatting with fellow pilots at Salina and Great Bend.

We knew the weather was iffy for the third day as a cold front was headed our way.  As it turns out, I could not have aflown that day and been grounded further away from home.  So, I drove back to Hutchinson, picked up my repaired Coupe and flew her home the day after the tour.

A huge shout out to Midwest Malibu and Wells Aircraft at Hutchinson Regional Airport for taking such great care of me and my baby in our time of need!

Not Just For Pilots

Difficult Critical Decision times come our way frequently, and not just for pilots.  Pilots train to recognize these moments so that we don’t push through when it is unwise to do so.  I have dealt with many an accident where this kind of critical thinking does not occur.

Difficult Critical Decision making is useful to anyone to avoid emotions overriding good sense.  For instance:

You can do the same as I did:  think about how the “accident report” would read if you push forward.  It may not be life or death, or is it?

What  Difficult Critical Decision  have you made that turned out to be a blessing?  Perhaps one that you regret?  Feel free to share (or not) but don’t forget to subscribe!

Previous: How One Decision Made A Dream Soar
Next: Five Great Reasons To Pause A Project – The Little House Attic

5 thoughts on “How To Make The Correct Difficult Critical Decision”