“That is your legacy on this Earth when you leave this Earth: how many hearts you touched.” —Patti Davis While attending a monthly meeting of my local chapter of Women in Aviation, I was introduced to a gentleman who works for Flight Safety international.  I recognized his name and asked him if he was related to […]

“It was not a crash.  We knew what we were doing.  It was a forced water landing.” – from the Movie, “Sully” Aviation, both as a pilot and an air traffic controller, have taught me what to do in an emergency:  Fly The Plane. When I found myself talking to an aircraft in distress, one […] 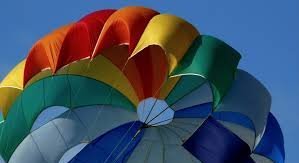 I always laugh and say I met God on the way up, and I got to know him on the way down. And so, as I’m crashing and losing everything, a lot of people run to God when they are struggling. And I was no exception. – Dave Ramsey Circumstances Crash Your World? By the […]

I flew my solo flight on January 10, 1992 at Jabara Airport (3KM at the time, now AAO) in a Cessna 152.  I wrote the following not long after that experience: My Solo Flight “I want you to taxi to the end, make two touch and gos, then full stop and come back here to […]

“Anything worth doing well is worth doing badly in the beginning” – Marshall Thurber  I do not like doing things badly.  I want to do things well.  The first time.  I see others doing a thing well, with grace and ease, so I jump in and, well, you all know the moment:  It feels so […]

“Everything you want is out there waiting for you to ask. Everything you want also wants you. But you have to take action to get it.” ― Jack Canfield I spent thirty-eight years in public service as a Federal Employee.  The first four in personnel, now called human resources, for the Air Force Reserves.  The last […]

“Dance above the surface of the world. Let your thoughts lift you into creativity that is not hampered by opinion.”  ― Red Haircrow I have been attending morning convocation via Zoom of the school where my spouse is on faculty.  Beyond the gathering and administrative aspects, this has allowed access to a creative process with wonderfully […]

I’m surrounded by such beautiful, creative people, and I just love sort of sharing their stories and their journeys –  Solange Knowles When difficult times find us, it is refreshing to find inspiration in the midst of it.  One addition to our daily routine during “social distancing” has been my attendance at the morning convocation […]

“If social distancing is taking its toll on your mental wellness—you are not alone”- David Stern, M.D. I wanted some ice cream yesterday and contemplated what fulfilling that desire would involve in the midst of social distancing.  Interrupting my thought process, I became aware of something familiar.  A sense of deja vu. It was the […]