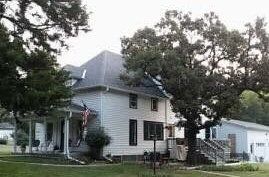 There is an eternal landscape, a geography of the soul; we search for its outlines all our lives.  Josephine Hart

My childhood is steeped in geography with Aunt Beulah’s House as a significant one.  These locations connect to relationships and key events.  In most cases, when memory recalls a particular occasion, it includes a place:
Not one-off destinations, but places to which we returned again and again.
One of those places was my great Aunt Beulah’s House in Jewell County Kansas.  Located at the end of a street on the edge of town, it had its roots as a farm.
The house, barn, and sheds lie on the north of the property, while the corrals, and pastures are to the east and south.  There is a creek that runs along the east edge of the property and volunteer trees populate much of the land.  It was a magical place, but then at that time in my life most places had adventure written into them!

Aunt Beulah is my maternal grandmother’s eldest sister, the first-born of the Miller-Hoag clan.  I was quite young when her husband, my great-uncle Edgar Lee passed on so, I have only vague recollections of him.
Aunt Beulah had been a teacher.   Once on her own with a son to support, she returned to night school, eventually earning her certification to teach special education.
This was in the very early days of this kind of specialized training; she was a bit of a trailblazer.    Aunt Beulah drove three hours each way to attend classes at Ft. Hays State University.  I remember her stopping by our home, coming from or going to, class from time to time.

Much of the time the Miller clan gathered at “the farm”, my grandparent’s home, but on occasion, we went to Aunt Beulah’s.  I remember Christmas celebrated there at least once.  When we visited in summer, the barn was the hang-out.

It was a very grand barn, at least it seemed so at the time.  It sat into the side of a small slope enabling  us to jump from hay loft to feeding stalls to trees.    Somehow we managed to stay in one piece with minimal cuts,
scrapes or bruises.
While in High school I stayed with her one summer.  I was fourteen, maybe fifteen.  It was then I “took up with” the “boy next door”.  Aunt Beulah was fit to be tied, as he was Catholic (we were Methodist – gasp!) and had quite the reputation with the girls around town.
I was perplexed at what seemed to me to be an overreaction to the situation.  It was a summer romance that died out when letter writing became tedious.  I wonder what happened to him?

When Aunt Beulah passed away, the house was kept by her family who had moved east with their jobs.  Neighbors took care of the place and the family returned each summer, with plans to eventually move back.  They graciously allowed other extended family to stay in the house when visiting the area.  It was a step back in time to do so.
A few years ago, Aunt Beulah’s family, did indeed move back.  The house had some damage from a broken water pipe.  It was heartbreaking, however, the grandson and daughter-in-law, like good Kansas natives, were undaunted.  They dug in and not only repaired the damage but upgraded the house in extreme home makeover style while maintaining the integrity of the original home.  It is stunning.

The House Back In Full Form

Twice this year, branches of the family with roots in Jewell County have gathered here.  In fact, this year of family gatherings began at this house in the spring, and then came full circle a few weeks ago the end of summer.  This last one, included descendants of each of  the Miller siblings.  Four generations from four states.
Back in the day, the Miller girls got together fairly often, at least those nearby.  In fact, I was closer to my great aunts on this side of the family than the aunts and uncles on the other.  I was in my teens before I realized the generational differences:  they were just aunts!
I think it is from them that I hold dear my position of Aunt, Great-Aunt in my household.   Thank you dear ladies.

A Day To Reconnect

This gathering of twenty-five or so of the Miller clan descendants was packed with family photo viewing, photo taking and of course storytelling.  Photos sparked laughter and reconnection to our forbearers . These were accompanied with recollections and stories both old and new.

I am glad we are less reserved these days about talking about the hard seasons.   The fact we were gathered in this place is a testament that good memories prevail.  We come from really good people who, like all, have had hard things to deal with.  For me, it helps understand myself better.  After all, I share DNA with these folks.

A Walk Through Time

As my husband and I toured the barn, sheds and creek area, with one of my second cousins, I was both taken back to my childhood and overflowing with gratitude that this property was rescued from time.
Jewell County is a treasure that could use discovery by the world.  In fact, it was a nominee for a HGTV Hometown” project.  At the same time, shhhh don’t tell the developers – it might spoil the landscape forever.

This is the last of the family reunions for the year and, like a summer romance, a good place from which to transition to the fall season.  Only one of the gatherings was planned ahead, the other’s popped up as occasion presented itself.  Either way, they are precious.  Please take, no, make time to connect with your family.  It’s not too soon to start reaching out for the holidays!
Yes, I can hear Aunt Beulah’s laughter reverberating through the rooms and out the kitchen door….while Aunt Beulah’s house smiles.
What extended family gatherings did you have this year?  Do you have any planned?  Please share below and don’t forget to subscribe!

Previous: Nancy Hancock-Cullen – My Bio
Next: How To Stay Up To Date On EAA Airplane Building